The days of bromance and sisterhood.

Catch up on episode 1 here!

We pick up in episode 2 where we left off last – in the art classroom where Li Xia realizes that she is sitting right next to Xiao Si after he lectures her on keeping quiet. Oops.

Luckily Zhi Ang has taken a liking to Li Xia as he comes over to take a peek at her artwork. She refuses and they end up teasing each other a little bit, much to the dismay of Xiao Si. Dude, if you are not interested in this girl don’t be upset when your bro flirts with her!

is this a private school? it’s so nice!

i feel ya girl

The ever so popular tennis class finally arrives and Zhi Ang is particularly excited as he shows off his muscles infront of Xiao Si.

Zhi Ang: It’s perfect. Total perfection.
Xiao Si: Looks like you developed ok. It’s alright.
Zhi Ang: Oh my god. Wait, how come I can’t see anything anymore?
Xiao Si: Are you ill? Acting like you got blinded by your handsomeness? So immature.
Zhi Ang: You are so not fun.
Xiao Si trips Zhi Ang.
Zhi Ang: You got a problem? You jealous or what.

And yet they still head out together. Gotta love their bromance. I hope this is the one thing that doesn’t change!

For some reason male leads are always ganged up on by trouble-making good for nothing hooligans, so it comes as no surprise here when some upperclassmen decide to challenge Zhi Ang and Xiao Si to a tennis match. While the duo gladly accept, Li Xia jumps out to object on their behalf, but pretty much nobody takes her seriously.

The competition is fierce for sure as the scores waver back and forth with no clear winner. It’s obvious the upperclassmen have an advantage though because they are switching between a group of people while there are only two of our boys. Regardless, Xiao Si and Zhi Ang end up beating the upperclassmen who walk away with their tails between their legs 😛

Since they are having additional classes on Saturday, the students get a day off school as compensation. Li Xia and Qi Qi immediately decide to go shopping off campus. Other than buying a bunch of Eason Chan’s albums they also stop by KFC for a quick afternoon snack. Qi Qi uses this opportunity to complain about a girl (Li Yan Ran) she does not like. And of course who but this girl shows up in a speeding car and hits Li Xia in front of the school gate! Fortunately Li Xia does not sustain any major injuries, but instead of taking her to the nurse, the Yan Ran tries to pay Li Xia off. As if signaled by someone off camera (oh wait, they were signaled!) Xiao Si and Zhi Ang show up just in time to witness the accident. Despite Yan Ran’s best efforts at explaining what happened, she only gets reprimanded by Zhi Ang for attempting to use money to take care of things. 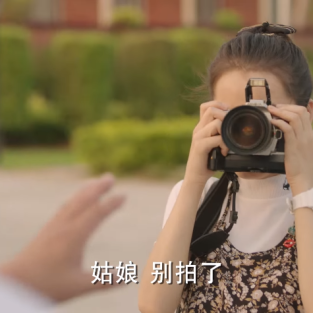 Just then, in a quick swoop, Xiao Si picks up Li Xia and brings her directly to the nurse. Woah woah woah. And that’s not all – while Li Xia is getting examined he even offers his hand in case she can’t take the pain. Someone is certainly putting on the moves.

Though she initially refuses, once the nurse touches her injury Li Xia immediately grabs Xiao Si’s forearm ^^; So much for playing coy!

shocked by her strength

Outside, an impatient Yan Ran is annoyed that Xiao Si is being delayed; she came to the school to pick him up for her birthday party. She attempts to go inside to get him, but is stopped by Zhi Ang and Qi Qi.

putting yan ran in her place

Yan Ran: You think I want to shout over here? If it wasn’t for that girl earlier I would’ve already picked up Xiao Si and left.
Qi Qi: What do you mean because of that other girl? It was clearly your fault, ok? If there’s anything wrong with Li Xia I won’t let you off the hook. Do you think you are the only one with birthdays? If you can why don’t you celebrate your birthday five times a year? You can’t talk so loudly outside the nurse’s office , don’t you know?
Zhi Ang: Yeah, don’t you know?

Meanwhile, inside the nurse’s office Xiao Si notices the art book Li Xia has been obsessing over, and a mock-up she drew. Instead of complimenting her, he tells her it’s ugly. Gee, you are a real charmer, huh? Cue eye roll please.

Yan Ran finally bursts in. She claims to be Xiao Si’s girlfriend and pulls him away before he can clarify or explain anything. In the days after Li Xia deliberately ignores Xiao Si and his offers of kindness…until he nominates her as the third class representative to enter the school art festival!

Summer’s Not Dead Yet