My summer is just beginning, but are theirs ending?

Fu Xiao Su and Lu Zhi Ang have been friends since they were kids. Once they enter high school they are joined by Li Xia, a girl who completes their trio. Though they dream of being friends forever while maintaining each of their dreams they are confronted with the harsh realities in their lives. As they are faced with death of loved ones, betrayal, imprisonment and abandonment over the span of ten years, will they be able to stay true to who they once promised to be or will they leave that all behind?

Full disclosure: I never read the book, but based on what I read about the premise and what I know the author this sounds like another incredibly depressing story about missed opportunities. So here goes nothing!

The story opens with a typical high school classroom on the brink of graduation. Everyone is teary eyed knowing that this is the last time they will do row call as a class. The teacher tries to lighten up the mood with a joke, but alas succumbs to the unstoppable sadness that looms over everyone. She then proceeds to call out our main characters one by one and we see Li Xia for the first time in her full glory – sunshine halo and all.

The teacher announces the close of class and congratulates them on their newfound freedom, but the whole class just runs up to hug her. Awwww! Amidst this Li Xia and Xiao Si come up together with a cake that says “we love you Mrs. Wen Ren.” And here comes the super bittersweet graduation song (remember Graduation by Vitamin C? Yup, like that) and a montage of students hugging and laughing. This is not good, so not good. When they have scenes like this they are only preparing the audience for a massive heartbreak later. I’m not ready!! 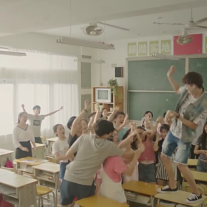 Later that day Xiao Si asks Li Xia what college she applied for, she doesn’t respond but he tells her he would be super happy if they end up at the same place again. The camera then pans to Zhi Ang who discloses somewhat mysteriously that he is glad to be fulfilling his mother’s dream. And to top it off? Qi Qi runs over with some lanterns she bought and claims that their wishes will come true if they wrote them on the lanterns. So they write their wishes down … but this can only mean one thing – massive heartbreak is to come. 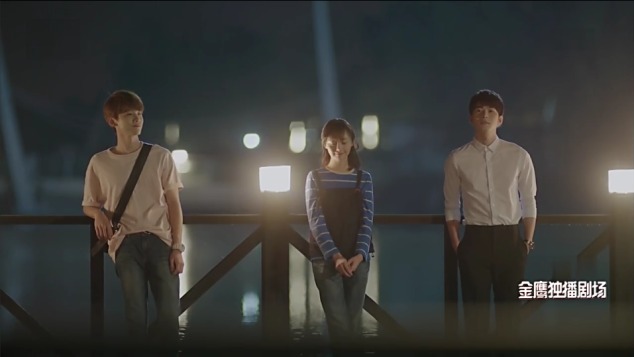 Their individual wishes are:

Qi Qi: Sooner or later we will stand together.
Zhi Ang: You all be good while I’m gone.
Li Xia: Wish that we will have many more three years (high school is three years in China).
Xiao Si: May summer last forever and that we will remain the same.

See what I mean? So much foreshadowing it’s scary.

It is the first day of high-school and we are introduced to two fresh faced Xiao Si and Zhi Ang. They bet on who can get to school first. When Xiao Si pulls ahead Zhi Ang quickly jumps into a taxi, thinking he is surely to win. However, the taxi soon hits traffic and he is forced to get back on his bike.

Zhi Ang flies past Xiao Si and narrowly bypasses Li Xia. Xiao Si is not so lucky – or is he lucky – and knocks her over. When she tries to apologize he lectures her on not being able to make appropriate assessments of situations. Bleh. But seriously though, the road is so wide there’s no way this would have happen in real life.

check out how wide that street is! so much space!!

While organizing her stuff Li Xia finds a paper that doesn’t appear to be hers. Oh of course, it’s Xiao Si’s and it got mixed up when they ran into each other! Before she can investigate further she is called to the campus lawn along with all other incoming freshmen for an opening ceremony. She takes the paper with her… oh I can see where this is going.

After the school principal makes his speech Xiao Si is called on stage to make his as the representative of the freshmen class. Unfortunately this is when Xiao Si realizes he lost his script aka the paper Li Xia found. He decides to just wing it on the spot, but freezes up shortly after. Li Xia suddenly figures out what that paper was and hides in shame. Meanwhile, Xiao Si’s legion of adoring fans are off the rails worrying over what’s going on with him. In a moment of panic Xiao Si blurts out that he doesn’t have much to say and that everyone should just study hard. The faculty is clearly not pleased, but his fangirls? Oh they think he is cool alright.

unimpressed by the principal’s speech

Li Xia finds Xiao Si as he comes out of the teacher’s office and apologizes for accidentally taking his script, even offering to explain the situation to the teacher. As is with most male leads, he is cold and aloof, brushing away her apology. Zhi Ang quickly explains away Xiao Si’s awkwardness and runs off to join his bestie for lunch. Why do all male leads have such loyal friends?

why do “cool” boys always walk around with their hands in their pockets?

The duo decide to try out a new noodle shop and Zhi Ang is determined to make fun of Xiao Si for what happened earlier.

Xiao Si: What are you doing moving around like this? Forgot to eat your meds?
Zhi Ang: I’ve known you for ten plus years. I’ve watched you act cool every single day and this is the first time I’ve seen you embarrass yourself in front of everyone. You get nervous too?
Xiao Si: Which one of your eyes saw me get nervous?
Zhi Ang: Every time you get nervous you touch your ear! You think I don’t know?
Xiao Si: Come here. Come closer. 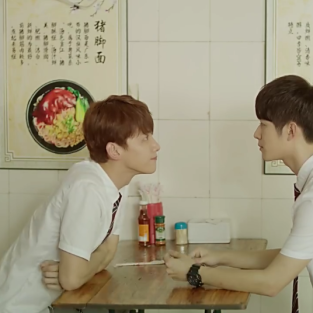 Lunch time soon ends but Li Xia fell asleep on some bench and gets to her first class late. Mrs. Wen Ren makes an example of her and tells her that she will have to recite the lecture back later. Zhi Ang and Xiao Si also arrive late, but they get off scot-free because they are #1 and #2 of the school every year. All the girls in the class burst with glee in knowing they are in such close proximity with the campus celebrities, but Li Xia is completely baffled by the commotion so her seat-mate/roommate clues her in.

Apparently Zhi Ang is super popular with the girls and likes to sleep in the winter. Xiao Si, on the other hand, excels at all academics including art. While her seatmate is super excited about this seating arrangement, Li Xia is a little frustrated that she is forced to be next to such a cold-faced person again.

the first look, but really what do you expect him to look like when you are gossiping about him within earshot?

Summer’s Not Dead Yet 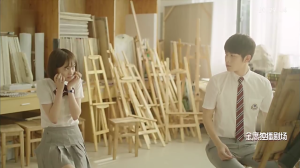