What happens when you turn twenty? 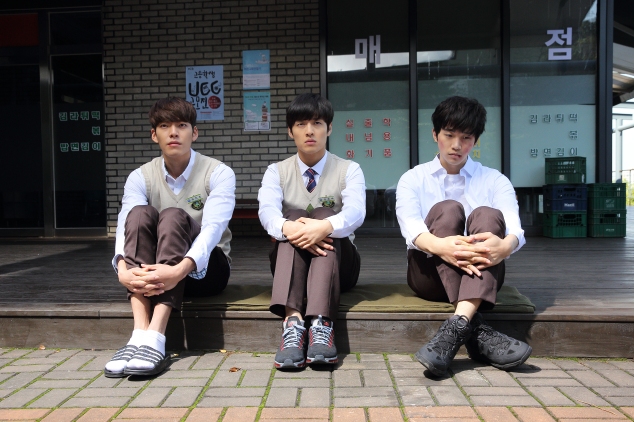 Despite having taken drastically different paths in life – Chi Ho who lives off of his parents’ wealth, has preoccupied himself with women; Dong Woo is the sole breadwinner of his family, but dreams of becoming a cartoon artist; and Kyung Jae the university student who has difficulty with women – these three have remained best friends. Now that they are turning 20, what new surprises will be in store for them?

I actually had no idea what this movie was about beyond the poster I saw for it, so I went into it with little or no expectations. To my surprise, this was a fairly decent movie, unlike some of the other ones I’ve seen recently. Though there wasn’t a central story or character, the plot was not disjointed or none of the characters got slighted. Each member of the trio was developed to a certain degree and while their personalities are a little canned, they still felt realistic enough. I didn’t feel unsatisfied or unresolved at the end of the movie, but I also didn’t feel like I just watched a masterpiece or anything.

Kim Woo Bin’s turn as playboy Chi Ho was enjoyable and possibly the most dynamic. Though not explicitly expressed, I felt like his character might be the one that experienced the most “drama.” Going from dumping girls left and right to being down in love is a pretty drastic change for him. However, I did like that the movie didn’t play it up as a life-changing moment for Chi Ho that was out of his character and instead had him resolve his feelings through humor. Dong Woo and Kyung Jae’s stories were a little less remarkable, but they had their equal share of screen time. Lee Jun Ho played a good Dong Woo, one who was caring but also had a streak of teenage rebellion. His conflicts were done well, and again without me feeling like it was super cheesy. Finally, Kang Ha Neul also brought to life “average Joe” Kyung Jae who may or may not have ended up being the luckiest of them all.

Overall, this movie was all about subtleness. I loved that nothing was in-your-face. Their friendship was more like an unspoken commitment to each other and less like a publicity stunt. It’s not a must watch by any means, but it is good pop-it-in Friday night movie when you are looking for a solid choice.