Starting a new life in a different era is surprisingly easy.

Okay, I’ll let y’all know right off the bat that I’ve never time traveled before. I don’t know how things would go if I actually did, but I imagined that there would be some type of adjustment period. After seeing Chen Che adapting remarkedly well in a era completely different from his own though…maybe it’s actually easier done than said. The guy’s not sweating it one bit, and even got himself a job, place to live, and friends in the matter of days! Before we know it, he’s going to find out the identity of his mysterious father in no time and it’ll be back to 2016. Just kidding, we still have 20 episodes left of drama to fill. Now, let’s give a warm welcome to babydaddy candidate #1!

After being told off by his mom to leave her and Zhen Zhen alone, Chen Che is in disbelief that he actually met his own mother in 1989. But hold up, no time to ponder that weirdness because something she said struck a chord with him. If her father aka his grandfather is a renowned astronomy professor, then maybe he can figure out a way for him to return to 2016! Yaaas, problem solved.

Waiting for the next time portal.

The next day, Chen Che saunters into Taiyuan Securities right when the stock market opens. Zhen Zhen, slimy client, Taiyuan’s manager, and all the other employees are waiting to see if the BS Chen Che was spouting yesterday turns out to be true or not. Eeeek, not looking too hot right now. But 10 minutes til noon, the numbers keep rising and Chen Che is looking more and more smug. 12 PM on the dot, the stock market closes at 10092.45…the number that Chen Che predicted it would the night before. Hand over that NT$200,000, sir!

Now that he’s paid off his debt to Zhen Zhen and has a good chunk of change leftover, it’s time to go get himself a bachelor pad. The only problem is that it’s 1989 and he has no line of credit or proof of employment. Chen Che calls Zhen Zhen and promises to be her client if she will be his guarantor for the real estate agent. But literally right before they’re going to sign the lease, the agent tells them the landlord no longer wants to rent. Zhen Zhen tells Chen Che not to worry because there’s an empty room at her house that he can stay at. He’s about to refuse but then remembers that Zhen Zhen and Ya Juan, his mom, are friends.

After getting him settled in as the new tenant at her house, Zhen Zhen asks Chen Che how he guessed the stock market number today. He gets pissed that she thinks it was a lucky guess, so he decides that he’s gotta show her something else. Chen Che tells her that the Northern California earthquake news that’s being broadcasted says there aren’t any survivors, but he can guarantee that they will find some in a couple of days. Stop showing off, dude! Zhen Zhen thinks he’s full of BS anyways.

Chen Che walks into Taiyuan to purchase some stocks that no one’s ever heard of, but it obviously rises like crazy. While he’s there, he casually asks Zhen Zhen about Ya Juan…you know, his mom. She doesn’t tell him anything, but then he sees that Ya Juan also works at Taiyuan. The way he’s always staring at her friend makes Zhen Zhen think he’s got some ulterior motive. Hm, not entirely untrue.

The manager is thirsting to hire Chen Che at Taiyuan, but he’s not interested one bit. So, he resorts to using Zhen Zhen to get to Chen Che. Either she convinces him to have dinner with them tonight or else she’s getting fired. Chen Che first tells her thanks but no thanks, but then hears from her family that the manager is mad shady and might force Zhen Zhen to “socialize” with clients. Hightailing it to the restaurant, Chen Che arrives just in time to see a totally wasted Zhen Zhen bitching out everyone there. Yo, gurl…shhh.

Zhen Zhen drunkenly stumbles out of the restaurant, leaving everyone there speechless. Chen Che follows her but the moment he looks away, she gets her purse stolen by a passing biker. Aiya. Girl is so drunk now that she’s legit passed out on the ground. Time to pull the knight in shining armor move and carry her home, Chen Che! With the help of her bro, Chen Che is able to put the very drunk Zhen Zhen to bed. 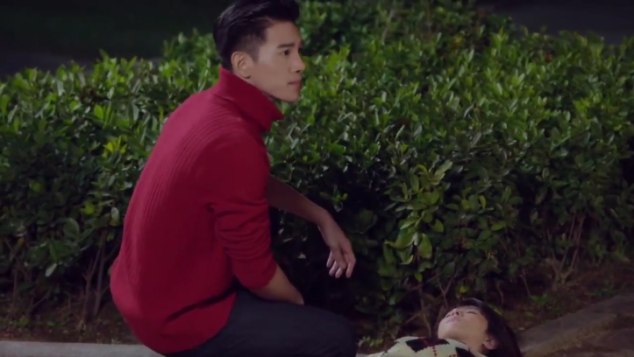 Is that my Uber?

When he sees how cute she looks while sleeping, Chen Che takes a pic of her on his phone. She immediately opens her eyes, but is still too wasted. She grabs Chen Che’s cheeks and pinches him like crazy, while speaking a lot of drunk person gibberish. Apparently she thinks that he’s either an alien or a fortune god. She does reveal one useful bit of info: Ya Juan is planning to leave Taiyuan soon. The next morning, Zhen Zhen has zero recollection of what happened, but luckily Chen Che is there to kindly let her know. He does do her one big favor though by accepting a job at Taiyuan, thereby probably saving hers.

On her way to work, Ya Juan runs into her maybe-boyfriend, Li Jin Qin, in the park. They see an abandoned puppy in a cardboard box in the middle of the pond, so obviously they attempt to rescue it. Ya Juan accidentally slips in the water, but Jin Qin is there to hold onto her. Babydaddy candidate #1?! Chen Che later sees Ya Juan with wet shoes, so he buys some new ones in the perfect size for her. He thinks of how his mom wears really worn-out shoes in 2016, and the new ones he once bought to replace them. It was a cute gesture until he starts sounding like a major creep by asking if she has a boyfriend and where she lives.

Totally just had these lying around.

After work, Zhen Zhen sees Chen Che staring at Ya Juan again. And he doesn’t help lessen her suspicions when he keeps asking if she has a boyfriend. Suddenly, someone bikes past them and Zhen Zhen recognizes it as the guy who stole her bag the night before! They chase after him, but the thief gets away when Chen Che has an asthma attack. Zhen Zhen dumps all his stuff out of his backpack to find his inhaler. But after making sure that he’s okay, she sees his phone’s wallpaper while picking up his stuff. His wallpaper picture is…him and his mom in 2016!

Chen Che was able to know the exact number the stock market would close on that day because he somehow had that info saved on his phone in 2016.

Zhen Zhen’s fam is 100% convinced that she and Chen Che are dating.

The modern suit that Chen Che brought in to YEB to get fixed is way too ripped, so Zhen Zhen’s dad’s going to make him a new one! Her dad also knew that she forced Chen Che to move in because she wants to help out with the family’s expenses.

Chen Che uses his grandfather’s name to purchase stocks at Taiyuan. Too bad Grandpa Chen is currently out of the country for a conference, so those questions about how to go back to 2016 will have to wait a bit longer.