Ahoy matey! There’s adventure, love and glaring plot holes to be found on the open seas.

When a freak waterspout turns into a time portal, Wong Tai Mui finds herself time traveling from modern day Hong Kong to the Qing Dynasty. There, she befriends a group of notorious pirates, including the infamous Cheung Po Tsai. In her quest to return to 2015, she assists Cheung and the pirates in battle with the Qing Navy and its leader, the Eleventh Prince. As Wong Tai Mui finds herself caught between these two men embroiled in historical conflicts, she must decide if her place is actually in 19th century Qing or 2015 Hong Kong. 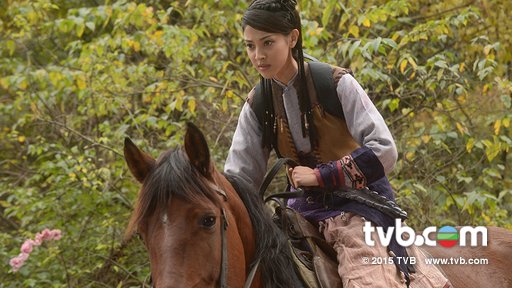 Maybe I have a subconscious desire to time travel because Captain of Destiny is the second drama I’ve watched in recent months that deals with the topic. (The first was Rooftop Prince, if anyone was wondering.) Or maybe there’s just something really endearing or interesting to me about time travel stories, especially when a romantic plotline is involved. It’s gotta be one of those things because on paper, Captain of Destiny does not sound like my jam at all. Nevertheless, my fangirl love for Ruco Chan won out because I kept watching even as the story became progressively more annoying and ridiculous with each passing episode. Don’t be fooled by its slick CGI effects, Captain of Destiny is most definitely not a sign of TVB’s improvement. Instead, it’s another mediocre drama that gives us more of the same even when the story is rather different.

The biggest issue I have with Captain is the lack of a cohesive plot. Yes, there was the time traveling and the war between the pirates and the Qing Empire, but neither of those plotlines meshed together well. It’s difficult to pinpoint the overarching story or the end goal of this drama. The first half built up to this epic showdown between the pirates and the Qing Navy, so logically that should have been the climax of the drama. Nope. The battle was stuffed into a random middle episode, and made the whole buildup to it look unnecessary and laughable. The second half then featured a whole lot of poorly written plotlines that really drove home the severe lack of cohesion and continuity in this drama. And don’t even bother with the actual ending because that was a total load of WTFness. But that’s classic TVB for you!

For most historical time travel dramas, there’s usually a very obvious reason as to why the person HAD to travel back in time. Either they have some type of unfinished business in the past or they are there to create/change history. But here in Captain, there’s absolutely zero reason why Wong Tai Mui had to go back to the Qing Dynasty. She literally just served as the object of affection for Cheung Po Tsai and the Eleventh Prince. Ugh. Honestly, she probably spent more time browsing her iPad that inexplicably still worked than doing anything of significance.

Perhaps a better cast would have slightly redeemed Captain, but we’ll never know. Although I love Ruco and his acting for the most part, even he wasn’t that impressive in his role as the Eleventh Prince. I blame this completely on the atrocious writing though because my annoyances were directed more towards his character than his acting. But if you wanna see peak Ruco, I would recommend watching him in Eye in the Sky from earlier this year instead. Now, that was some good acting. Tony Hung and Grace Chan, however, are a completely different story because they actually made this drama unbearable to watch at many times. Tony at least had comic relief moments that made his Cheung Po Tsai character somewhat cute and charming, but holy crap was Grace terrible. Like so, so bad.

Prior to watching, I actually had higher expectations for her than Tony because she truly did impress me in her debut role in Overachievers last year. But what Captain proved was that she is in no way ready or capable of carrying a drama on her own. Grace is fine in a supporting role, but completely unacceptable as a lead. Her overacting was extremely distracting and further highlighted how insufferable her Wong Tai Mui character was. TVB should have never let her star in a drama this early in her career, and especially not a grand production. She has potential to be better, but this was an abysmal showing from her. And let’s not even mention the ridiculous love triangle/square of Captain because it’s really not worth our time. No OTP moments to be found here!

For all these things that worked against Captain, I will say that TVB at least succeeded with the CGI effects on this one. This is kind of ironic because that’s probably what most of us thought would be the worst part of the drama. But no, the special effects were actually quite impressive! It’s not just impressive in TVB terms, but even in comparison to other dramas that boast similar CGI capabilities. Sure; the effects were obvious, but it wasn’t jarring or extremely fake looking like in all other dramas. So, good job TVB; you did at least one right thing with Captain.

Honestly, if Ruco wasn’t in this drama, I would have peaced out after like 15 episodes. Alas, the Ruco love runs deep and pushed me to reluctantly keep watching. A few good things, however, did come out of watching Captain of Destiny: Ruco rocks that Qing style like a boss, Tony Hung’s kinda really charismatic, and the OST (particularly Linda Chung’s sub-theme – linked below). Not all was lost, but Captain of Destiny is still a largely illogical drama that took most of the usual fun out of time travel dramas. What a waste of all that CGI money.

And lest you think that TVB can’t do a time travel drama well, then watch A Step Into the Past starring Louis Koo in his last drama role and a very young (and dark) Raymond Lam. One of my all-time favorites from the good ol’ days. Fingers crossed that the rumors of a movie version are true!

How I felt about this drama too.