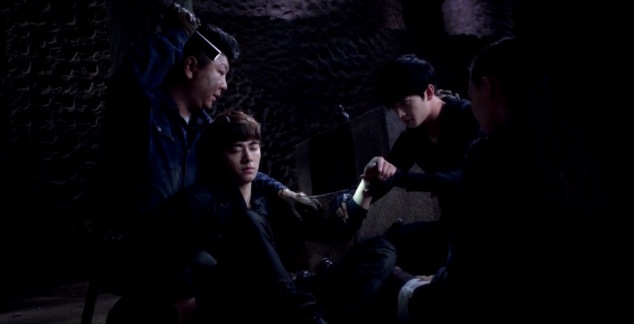 Our favorite damsel in distress.

It’s already the midway point of The Lost Tomb yet I’m still not sure whether to characterize this drama as fast or slow-paced. After every episode, I come away from it feeling like absolutely nothing happened…but then the recap would prove otherwise. Is it the story? The acting? Or the scenery? I guess it really doesn’t help that the characters and us, the audience, have literally been wandering in circles in the dark for all these episodes. There seems to be some promising development at the end of this one, but it’s still all too confusing and illogical for it to really pique my interest. Sigh, I just don’t know! I had such high hopes too…

After using his magical blood (again) to save Wu Xie & Co. from the monster bugs and random zombie, Xiao Ge shows us even more of his medical skillz. He finds a bug buried deep in Pan Zi’s skin, and he straight-up digs his fingers into the wound to pick it out! UGHHH. But thankfully, this bug was already dead and wasn’t poisonous. Um, yay. But before they can even begin to think about relaxing, Xiao Ge hears the laboring footsteps of the same zombie that was coming after them earlier. 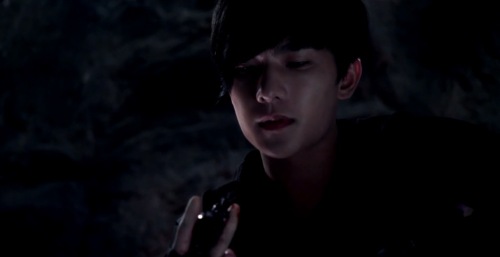 Anybody got a napkin?

While Wu Xie, Pan Zi, and Pang Zi escape, Xiao Ge takes on the zombie all by himself. When they see that he didn’t follow them, the three dudes literally spend 5 seconds whispering his name before giving up. Wu Xie, however, wastes no time in grilling Pang Zi about why he’s here. He claims that after their Mongolian adventure, he followed Ah Ning and crew all the way to the tomb, and was also surprised to see their group here. He explains to Wu Xie that the story he read about the lord with the ability to borrow dead spirits as soldiers was a big fat lie. Even the mysterious room full of coffins was just a setup to thwart off grave robbers.

Weirdly enough, Wu Xie is more convinced by the magic hocus pocus story than this way more logical explanation. When Pang Zi continues explaining about how he got lost in this tomb, they all realize that the place they’re in right now isn’t actually the tomb they’re looking for. Womp. Amidst all this confusion, they finally get to talkin’ about wtf is Xiao Ge’s deal. Everyone’s suspicious about why he knows so damn much about the tomb and all its monsters. And right on cue, Xiao Ge reappears around the corner without even a scratch on him.

One puzzle at a time, plz.

Pang Zi does a walk-through of the place they’re currently hiding out in, and comes across a severed arm. The fun surprises just keep on comin’, don’t they? They figure that the owner of this missing arm was the zombie that attacked them, and was also part of Ah Ning’s crew. Right on that cue, Ah Ning comes running out. Instead of kicking their asses, she’s so weak and injured that she’s quickly subdued by Pang Zi. Xiao Ge quickly knocks her out too because she too has a monster bug inside of her.

Xiao Ge continues being the wizard nurse and pulls the bug out of Ah Ning’s leg…with his fingers again. Ugh. Apparently the bug this time around was mad poisonous because Wu Xie actually got bitten too and passed out. Xiao Ge cuts his finger and feeds him some blood (mmm…), and Wu Xie almost immediately regains consciousness. WHAT IS XIAO GE’S DEAL?! Somebody tell me, please! High Shao and Cheng Cheng, for sure, aren’t going to be answering though because they’re being held at gunpoint by the bad guys who’d been staking out the tomb!

Ah Ning tells them that she still has people above ground, and that her orders were to return from the tomb before nightfall. If she isn’t able to, then it’s more likely than not that High Shao and Cheng Cheng will also be harmed. While looking around for an exit, they find one but it’s been blocked by a brick wall. No problem though because Xiao Ge’s here! He uses his magical fingers to pull out some bricks. Pang Zi finishes the job by literally running into the wall to knock it down.

Xiao Ge tells them to get a move on because the zombie is back. To everyone’s surprise, the so-called exit they just crashed into is just a narrow space between boulders that they have to crawl through. It’s not a problem for most of them, but when it’s Pang Zi’s turn…the zombie is hot on his heels! Xiao Ge stays behind again to battle with the zombie and is able to drive it away. When they reach the other side of the boulders, they find themselves looking out at an enormous tree in this open space. Everyone & myself, included: WTF?

They spot a pair of corpses lying at the base of the tree, and Pang Zi infers that one of them must be the body of the lord with all the spirit-summoning powers, Lu Shang Wang. Pang Zi attempts to climb down via one of the vines, but is startled by the sudden appearance of Uncle Three shining a flashlight in his face. Oh yay, the buzzkill is here again. During the happy reunion between Wu Xie and his uncle, he just up and faints again! He goes flying off the ledge, but Xiao Ge is able to grab onto him and swing them both on a vine safely to the ground. What a prince! 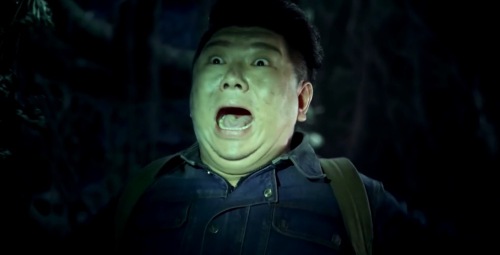 All the bejeezus scared outta him.

The vine that Pang Zi was using to support himself, however, breaks and he crashes onto the altar that’s holding the two corpses. Uncle Three examines them, and realizes that there’s something inside the mouth of the female corpse. He pushes on the side of her throat to release the deadly darts(?!) inside, and out falls a key. The corpse immediately reverts back into looking like a corpse, instead of the pretty lady she just was.

Sorry for ruining your face…

They think that the key is used to unlock the box that the male corpse is holding. But before they can test it oit, Xiao Ge yells out to be careful. Hidden inside one of the many twisted branches of the giant tree is a green monster-esque eyeball watching them…

The tree has eyes!

When the zombie touched Pang Zi’s skin, it burned him wherever it touched.

Most romantic moment of the drama by far.