Let’s go on a subterranean adventure!

Antique shop owner and descendant of tomb raiders, Wu Xie, has taken upon himself to seek out and return all the ancient Chinese artifacts that have been lost in the world. When he comes across an ancient scroll from the Warring States period that contains information about a mysterious tomb filled with treasures, he sets out to find them. With his grandfather’s diary and a team of skilled raiders, Wu Xie is determined to not only find the treasures but also the reasons for his family’s massacre.

Based off a very popular Chinese internet novel, The Lost Tomb is slated to have 8 seasons filmed over a period of 8 years. This may not sound that impressive if you watch Western TV shows because that’s the usual format anyways. But for a Chinese drama, this idea is absolutely unique and kinda out of left field when typical cdramas are the standard 40+ episodes. I personally love this new format because it allows for new plotlines and ideas each season while also avoiding the “drama fatigue” of many long dramas.

After hearing this drama being described as “Harry Potter meets Game of Thrones” (Viki), I was very intrigued because I love both those things. While I don’t think it’s anything at all like Game of Thrones, the high-speed adventure and action story is still fun and refreshing. Estelle and I will be recapping all 12 episodes of the first season, so join us to see what mysteries lie beneath the earth for this merry band of tomb raiders!

Wu Xie, antique shop owner and descendant of tomb raiders, is on an ongoing mission to return the artifacts his grandfather stole back to the country. Grandpa Wu wasn’t a bad guy though because he only stole stuff to buy food for his family! Besides leaving Wu Xie with an enormous sense of guilt, he also gave him his tomb-raiding journal that’s filled with all kinds of weird stories. Gee whiz, thanks Grandpa. 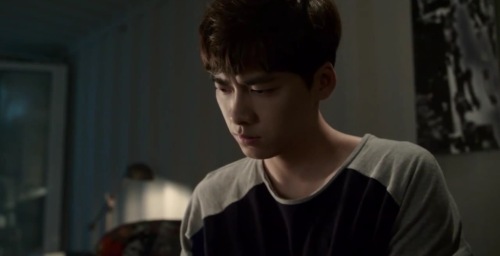 Wu Xie and his buddy, High Shao, are being chased across a Mongolian desert by a bunch of sniper rifle-wielding baddies. They seem to be after the cow head helmet/figurine artifact that the guys are trying to return to the Chinese Ministry of Culture. Wu Xie accidentally crashes his car into a sand dune, and the bad guys catch up in time to graze his arm with a gunshot. Right when it looks like Wu Xie and High Shao are goners, a random guy by the name of Pang Zi comes racing in to swoop them away.

Excuse me sir, but where you get them fly goggles?

The bad guys follow the three of them on a chase through a Mongolian village, but Pang Zi’s expert driving allows them to escape. After surviving multiple high-speed chases, the fellas make a pit stop at a restaurant to recharge. Wu Xie finally gets around to asking Pang Zi who he is, but all he gets is a lie about vacationing in Mongolia. But Pang Zi makes a mistake while talking and accidentally reveals that he knows about the cow head artifact. There’s no time to figure out his deal though because the bad guys and their leader, Ah Ning, have caught up with the guys at the restaurant.

Just a casual vacation in Mongolia.

They try to escape with the worst disguises ever, and unsurprisingly get caught right away. Pang Zi tries to hold off the bad guys, but gets his ass kicked by Ah Ning. Amidst all the confusion, however, the guys manage to get away once again. They try to hide out in a temple, but of course, Ah Ning & Co. catch up to them. Pang Zi comes up with the brilliant idea to divert their attention by blowing up their own car, but these bad guys aren’t totally stupid. They surround the temple, blocking any possible escape routes. 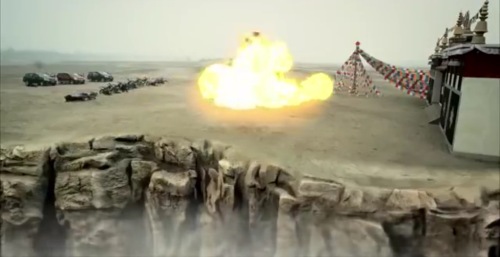 Wu Xie steps out to negotiate with Ah Ning, but she ain’t got time for that. With no other way to protect the cow head artifact, he throws it over the cliff that’s right next to the temple. Everyone’s obviously freaking out that he did that, but a sudden desert storm suddenly kicks off to distract them. In the middle of the swirling sand, a guy dressed like the Angel of Death/kpop boybander pops outta nowhere, holding the cow head artifact. What da hell…? 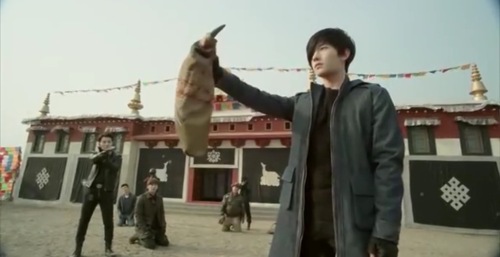 Emo guy’s apparently got some boss powers because his appearance scares off all the bad guys, and Wu Xie gets his cow head back. He disappears as quickly as he appeared…but I don’t think that’s the last we’ll be seeing him and his glorious sideswept bangs. Wu Xie and High Shao successfully and secretly return the artifact to the Ministry of Culture. But later on, they discover that the old cloth used to wrap the artifact has an ancient scroll hidden INSIDE of it. Oh snap.

That could use a wash.

Back home, Wu Xie finds it weird that there’s been no news about the cow head being returned, meaning it must not be that big of a deal. If that’s the case, maybe it’s not the artifact that was important to those bad guys, but that cloth with the scroll. Careful examination of the scroll shows that it’s ripped on one side, so it’s very likely that it’s just one part of a bigger scroll. But even though Wu Xie stays up for three days investigating the origins of it, there aren’t any more clues. That is, until he gets a phone call from a restaurant saying that his girlfriend wants him to pay her tab.

Wu Xie and High Shao hurry off to the restaurant to meet the girlfriend that Wu Xie didn’t even know he had. His “girlfriend,” Chen Cheng Cheng, shows them a picture of a scroll that just so happens to be other half to the one Wu Xie has. It turns out that High Shao put the news of the scroll online, and Cheng Cheng came a-knockin’ with information. Even though the two halves match up, Wu Xie still can’t figure it out. But when he gets a text from his uncle to meet up, it looks like some of his questions will soon be answered.

Still not quite sure what to make of Pang Zi. While he was letting all sorts of info slip out, he also revealed that he knows Wu Xie and High Shao studied abroad in Germany. How he know that?

Wu Xie and High Shao are apparently roommates who live in a house made out of old storage units. Those hipsters. 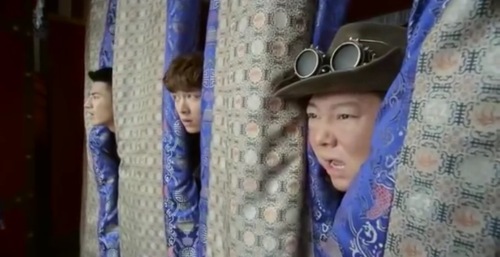