Staycationing with your crush, his crush and her crush. 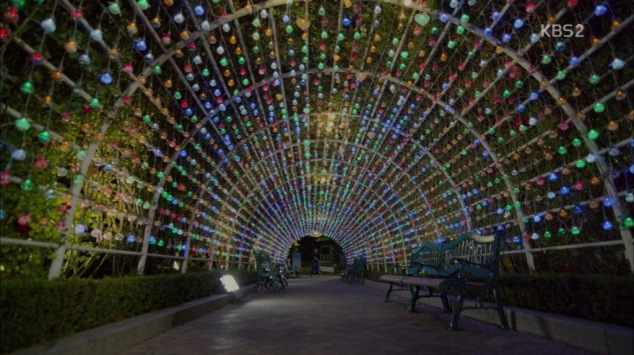 To go back in time.

Previously on The Producers… ep 6 recap

Let me be honest now and tell y’all that I’m a total Seung Chan-Cindy shipper. Maybe it’s because I always have a soft spot for those romcom love lines that has two people with total opposite personalities getting together. Even though the drama keeps on trying to make Seung Chan and Ye Jin a thing, my heart is already with Chandy. It’s nice to see these characters’ personalities outside of the workplace, but I’m still hoping that The Producers will be able to make a more cohesive story arc instead of a bunch of smaller plotlines. But until then, Team Chandy!

RELATIONSHIP UPGRADE | Ye Jin is really caught off guard when Seung Chan holds her against him in an embrace. But instead of feeling any lovey doveyness, she thinks he’s just being weird. Seung Chan quickly tries to recover by saying that he’s just trying to prevent strangers from seeing her cry. I guess it worked because Ye Jin sorta cheers up, and even allows Seung Chan to address her more casually from now. Meanwhile, Joon Mo is scratching his head trying to figure out how to get Ye Jin to come home so that he can make her feel better. He clearly knows his BFF well because he succeeds in getting her home by threatening to cut up her most expensive purse. Low blow, dude! Joon Mo apologizes and tells her to stay here without considering moving out again. Ye Jin appears to forgive him, but their feelings for each other are just as ambiguous as ever.

ONE EXTRA GUEST | Cindy is discharged from the hospital, but she’s going straight back to work instead of getting rest. While waiting in the van in the parking garage for her manager, she sees Seung Chan and Ye Jin also leaving the hospital after they went to get Ye Jin’s stitches taken out. Cindy decides right then and there to jump out and get into Seung Chan’s car. Somehow her manager doesn’t realize that Cindy isn’t in the car until he’s driven away from the hospital. At least he’s smart enough to go into hiding from CEO Byun. Cindy reveals to Ye Jin and Seung Chan that she hasn’t had a single day’s rest since debuting 10 years ago, and she just wants four days away. Someone give her a vacation! And since she has no money or friends and an injured leg, they have no choice but to bring her to Joon Mo’s apartment. 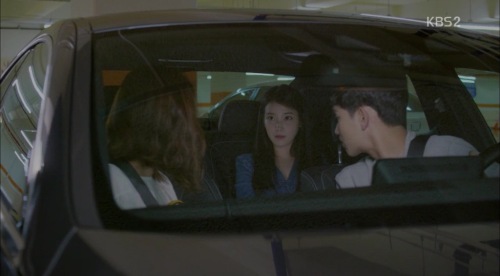 LUXURY ACCOMMODATIONS | While rumors are going around that Cindy’s missing and hiding in Paris with her chaebol boyfriend, she’s making herself right at home at Joon Mo’s. Her day gets even better when Seung Chan buys the requested limes for her water and agrees to stay for dinner. When Joon Mo gets home from work, he’s so surprised to see Cindy chilling in his house instead of a luxury Parisian hotel that he nearly passes out. Not wanting to deal with CEO Byun, he reluctantly agrees to let her stay. Cindy may be complaining about the messiness of the apartment and the lack of quinoa in the pantry, but she’s definitely having a good time. She even gets to sit in a bed together with Seung Chan while he reads her a bedtime story! Can’t do that anywhere else but here; that’s for sure. 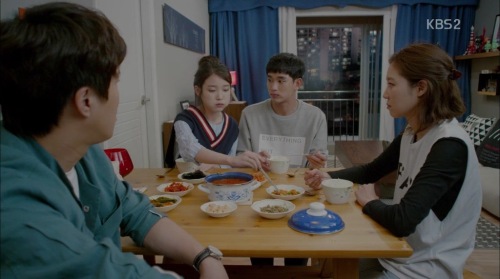 Nothing tastes better than a homecooked meal.

DRINKING GAMES | Just when their plans for hiding Cindy seem to be working, Joon Mo gets a call from CEO Byun and she’s already outside his apartment. She admits to him that Cindy is indeed missing, and then makes some vague comments about how to manipulate the media. But Joon Mo doesn’t back down or reveal Cindy’s whereabouts. Everyone’s so relieved that they decide to crack open a few bottles of beer and get their drink on. They start playing a game where you have to respond, “of course,” to any question asked of you. It starts off innocently enough until Seung Chan plays and asks Ye Jin if she knows that she’s prettier than she thinks. When their questions become more and more flirty, Cindy is not pleased. The four of them continues to throw back the drinks until everyone will be dealing with a massive hangover tomorrow morning.

Time to get turnt up and honest.

IT’S TOUGH OUT THERE FOR A PD | During breakfast, Joon Mo and Ye Jin kindly suggests that Cindy should perhaps go back today…until she reveals that it’s actually her birthday. And when she hears that Joon Mo is going to the amusement park tonight to scout filming locations, she begs him to let her go with him. Cindy may be living comfortably in the bubble for these few days, but everyone else has to get back to work. Rumors have surfaced that Ye Jin pushed Cindy on purpose, and the fans are so pissed that they vandalize her car. Yup, thanks CEO Byun. Seung Chan is so paranoid that someone’s out to harm Ye Jin that he follows her around, “protecting” her from food delivery guys and 4Minute’s manager. (Anybody else get Star flashbacks when he spun Ye Jin around in an embrace to avoid an oncoming motorcycle?)

Are you bothering the lady?

BITTERSWEET BIRTHDAY | At the amusement park, Seung Chan and Cindy go off on their own while Joon Mo scouts the filming locations. Cindy reveals to Seung Chan that she came here 10 years ago with her parents. She had begged them to bring her here for her birthday, but now she wishes that they never came because that was the day she was discovered by CEO Byun. It was also the last day she was able to truly spend time with her parents before they passed away. *tears* She spent every night thinking about it for the past 10 years, and she can’t sleep because of it. Seung Chan wipes away her tears and tells her that it’s not her fault. Instead, her parents are looking down at her and thinking that she’s worked hard and done so well on her own. Ahh, the tears are unstoppable now! If Cindy didn’t love Seung Chan before, she definitely does now. 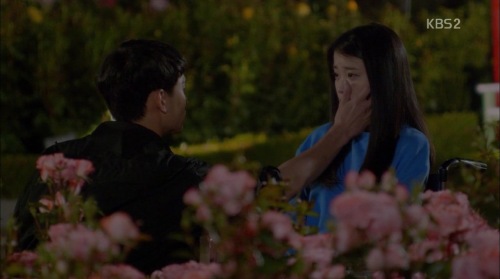 WORD ASSOCIATION | Cindy asks Seung Chan to help her stand up from the wheelchair she was using. She didn’t think there would ever be a reason for her to come here again, but she’s glad that she came here today with him. Whenever she hears the word, “amusement park,” from now on, she’ll think of him. Then, she leans forward and kisses Seung Chan on the lips! YOU GO, GIRL! Cindy tells him that now whenever he hears the word, “amusement park,” he’ll always think of her. Omg, too much cuteness. Seung Chan literally has been frozen from the unexpected kiss and can only stare at her in response.

GOOD SAMARITAN? | Ye Jin gets to the amusement park after everyone else because she had to take her vandalized car to the repair shop. She gets a call about her headlights being on. While walking back to her car and telling Joon Mo over the phone that she’ll meet up with them soon, she realizes that she already took off the sticker from the windshield that has her phone number on it…so how did they know her number? Startled by a noise behind her, Ye Jin whips around and is so surprised to see someone that she drops her phone. Who could it be?!

One thought on “The Producers (Ep 7 Recap)”