Who has the best bros in the world? Lik does.

Previously on Eye in the Sky… ep 15 recap

At this point, I wish I could fast forward through all the scenes with Jan because they are that boring/random/insignificant. Dammit; there haven’t even been any shippable moments for the couples, so what’s the point? Give me more scenes with Lik and Szeto going head-to-head! Seriously, the twins are on fire when they’re enemies instead of biffles. Look no further than episode 17 because that was legit a masterclass on how to troll. Let the record show though, I am still on Team Szeto! (But Lik’s hot too…) 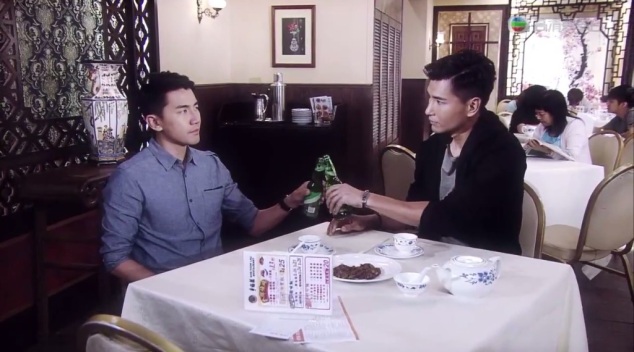 JUST FOR SHOW | Right as Jan is doing her daily daydreamin’ of Szeto, he calls her to meet for lunch. She happily skips to the lunch date ready to confess her love, but then sees him holding Chow Jing Man’s hand. Say what now? When Jing Man goes to the bathroom, Szeto tells Jan that he’s finally with her now after waiting 20 years. Jan is obviously heartbroken, but little does she know that it’s all fake! Szeto is pretending to be dating Jing Man because he doesn’t wanna hurt Lik any further. Wow, what a bro.

FRIENDLY REMINDER | I guess Lik agreed to Mr. Kong’s deal to steal the painting in exchange for the diamond because he and Han are staking out its location. But those two just can’t seem to get along, and they legit start fighting. Szeto pops outta nowhere to break up the fight, and reveals to them that he’s back with the police now so he has every right to interfere with illegal activities. He warns Lik yet again that he’s gunna keep his eye on him. Be careful Lik because the police have already figured out their plan to steal the painting! The police seriously got like 1000% smarter since getting Szeto back. But in other sad news, Lik announces to the fam that he’s going to move out. Nooo, the bunk beds!

INSTANT NOODLES | When Jan and Agatha go to her dad’s P.I. Firm, they find out that his assistant, Fu Gwai, cheated him out of all his money (and the lease to his house) to take over the store to sell Filipino instant noodles. While Jan is yelling and defending her dad, George shows up to chuck some noodles at Fu Gwai. The three of them get chased out of the store, and George tries but fails to hide from Jan. Turns out that his grand plans to move to the Philippines was all a big fat lie.

BRO CODE | Lik is able to convince Terry to help him steal the painting by playing the “bro card,” and pretending that he’s scared that Mr. Kong will kill him. He also swears that this is going to be the very last time, but we all know better. Poor Terry really didn’t want to do it, but he’s also just too good of a bro to Lik. First, he and Lik put on a little show for Szeto to make it seem like Terry won’t agree to help. Then, he lies to Agatha that he and his grandma are going to visit relatives, but she quickly figures it out when Jan reveals that Lik is Szeto’s long-lost twin/Ka La. And now Jan knows about them two being international thieves too. Agatha tries to stop Terry from going by giving him an ultimatum that it’s either her or Lik (lol), but he chooses his bro.

THE MAIN ATTRACTION | Szeto and Jing Man go to see that movie that he and Jan were supposed to watch together, and of course Jan just so happens to be watching it too. Are there no other movies out or something? She sees Jing Man trying to snuggle up to Szeto during it, but he purposely leans to his other side to avoid her. Cold shoulder, indeed. When Szeto sees Jan in the lobby afterwards, he quickly says that he and Jing Man have a dinner reservation and bounces. During dinner, Jing Man brings up their high school memories and tries to put the moves on Szeto. Too bad though because he’s just not that into her anymore. Both Szeto and I think she’s drunk…

Everyone knows the armrest is the border. 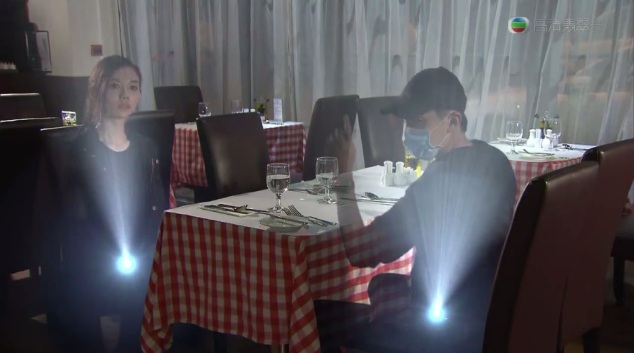 DROP THE ACT | Jan uses her P.I. skills to find out where Jing Man is staying, and confronts her about her fake relationship with Szeto. Jing Man folds pretty quickly and admits that they are indeed pretending to be a couple.  Jan interrupts Szeto and Scarlett’s stakeout the next day to demand an explanation about why he’s giving up on justice, love, and her because he wants to protect Lik. Way to make it about you, Jan. Szeto says that he won’t arrest Lik if he never does anything illegal again, but Jan ain’t buying it. She knows that he’s willing to sacrifice everything because he thinks that he owes it to his brother, so he doesn’t deserve her love anymore. Jeez, who’s the selfish one now? But omg, Kevin killed it in this scene with the tears lingering in the eyes. So, so good.

SECRET SMELLY WEAPON | Jan overhears her dad making a shady phone call, so she decides to follow him. She sees him buying a lot of grasshoppers, then visit a public bathroom, and is able to deduce that he’s gunna release some “poop grasshoppers” into Fu Gwai’s store as revenge. She tells Fu Gwai what her dad’s planning to do because she doesn’t want him to get in trouble. After much convincing and kissing him on the cheek, Fu Gwai agrees to fake apologize to George. But instead of apologizing, the little jackass just further insults George so that he will go release the smelly bugs and get arrested.

NO PHONES AT THE TABLE | Lik uses his parents’ wedding anniversary celebration at home as the perfect time to steal the painting because he knows that Szeto will be there too. But it’s not all fun and games at the Szeto household because both Szeto and Lik are glued to their phones. While Szeto is getting updates from the police, Lik is sending out messages to Terry about the job. They both know what’s up and they spend the whole night trolling each other. When Szeto says he’s gotta go, Lik says he’ll leave too. Then, they both simultaneously decide to stay. So. Much. Tension.

DIVERSION TACTICS | The police tail Han and see her get into a mysterious man (Terry)’s car, and per Lik’s instructions, they drive to a restaurant for a seemingly innocent meal. Szeto secretly advises the police that the restaurant may be a diversion, and that they need to send officers to the mansion immediately. But because they literally cannot do anything right, the police manage to crash their car. When Scarlett sends Szeto a video recording of Terry and Han at the restaurant, he sees the image flickering because…it’s a HOLOGRAM! Oh snap.

RELEASE THE HOUNDS | While the police are being their usual stupid selves, Terry and Han are already at the mansion. After Han sics her attack dogs on the bodyguards, Terry climbs up the side of the house and easily breaks into the safe to steal the painting. Lik instructed him to attach a tracking device on the painting before giving it over to Han, and then to split up running. But what he didn’t know was that it’s actually a bomb! It goes off while Han is running away from the bodyguards, and she ends up getting shot to death by them. Lik’s goal was always to go after Han, and not to actually steal the painting for Mr. Kong. Szeto’s blood pressure is skyrocketing and he asks if Lik really wants to be arrested, but Lik ain’t sweatin’ it. He gets in the last word by saying it all depends on which one of them is smarter…

COUNT ME OUT | Terry bursts into Lik’s office at YM that night, grabs him by his collar, and throws him onto the desk! Lik is still being as nonchalant as ever, and even congratulates themselves on getting rid of Han. Terry is freaking the ish out because he could have been killed too. Lik annoyingly reassures him that duh, that’s why he told them to split up. He tells Terry that he not only knows where the diamond is, there’s a bunch of other valuable stuff in Mr. Kong’s safe. All they gotta do now is kill the old guy, and they’ll be stupid rich. Terry tells him to STFU because he only helped him because of their bro-lationship and not the money. This is the last ever time he will help him because they are no longer bros! Since he has no partner anymore, Lik inexplicably reveals his plan to Mr. Kong before whipping out a gun at him. But because Mr. Kong is a thief too, he knew what to expect. He willingly opens the safe for Lik, and whatever he sees in there does not make him happy. It’s probably nothing. Literally.