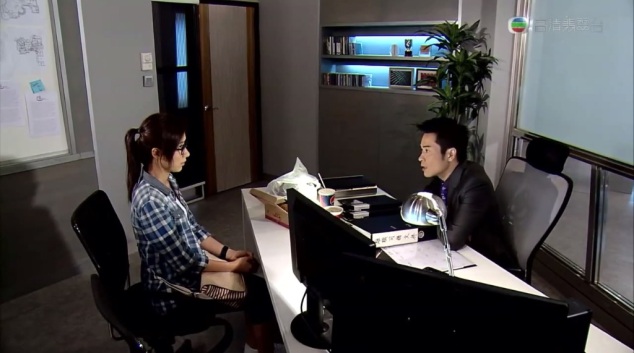 Previously on Eye in the Sky… ep 5 recap

We’re not even halfway through the drama, and it’s already throwing out all these crazy plotlines at us. And I love it! While the last episode was a revelatory one that finally confirmed that Lik is indeed Szeto’s long-lost twin bro, these two episodes really ratcheted up the drama and helped to propel the story forward. At this point, the arson case seems like such a long time ago. Who cares about that anymore? Oh wait, Szeto totally does.

P.S. Anybody else really want KFC after seeing all the product placements? Good drama & fried chicken…that’s the dream.

FACE OFF | Lik is overcome with a really bad headache after the failed burglary, so Terry immediately fills a tub with water and ice for him to submerge his head into. While underwater, he flashes back to how he and Terry escaped abroad to Manila after setting fire to Big Bear’s drug den. Lik chose Manila of all places because he wanted to steal a diamond there that’s worth a bajillion dollars. The job seemly goes off without a hitch until they get ambushed by a mysterious gunman, and Lik’s face freakin’ catches on fire during the ensuing car explosion! His face pretty much burned completely off, and the results were um, not very pleasant to say the least. But thanks to shady plastic surgeons and 30+ reconstruction surgeries, Lik has the face he’s got now. Pretty good job, if you ask me. The headache is a side effect of the the screws that the surgeon had to put in his skull. Lik is still super pissed that he got his face burned off (duh) and the diamond stolen, so he and Terry tracked down the jewel’s last known location to retrieve it. And where is that? Why it’s none other than YM Hotel! Aha.

ONE BIG HAPPY FAMILY | Szeto and his parents have Lik over for dinner, which has now become a weekly tradition. When his parents rave and brag about Szeto’s achievements and happy family moments, poor Lik thinks about his own sad childhood. After his adopted parents’ deaths, he befriends Terry and they take up stealing to survive. Seeing how teary-eyed Lik got, Szeto and his parents suggest that they stop chatting and play some Wii Sports together instead. Lik even gets his own avatar added to their account. Yay for small victories! Better than nothing, right?

GRAND OPENING | At Agatha’s all-female P.I. Firm’s grand opening, their first customer hires her to investigate what her daughter’s been up to after running away from home. Jan’s dad crashes the party and tries to immediately steal that customer away. He and Agatha bet to see who will solve the case first, and the loser will have to admit that they’re wrong. Szeto whisks Jan away during all this nonsense to persuade her again to ditch her dad, and even offers to be her mentor to help her hone her skills. Love skills? JK…maybe. Her dad overhears and gets mad when she admits that he’s not as good as he once was, so he literally kicks her out of the Ng P.I. Firm. But twist! This was apparently one long con by him to make Jan leave for Agatha’s company. Aww.

DATING IN THE DARK | The latest thing happening at YM is a speed dating event where the participants will be literally dating in the dark. Ya know, because inner beauty is more important than outer beauty, etc. etc. As Head of Security, Szeto is supposed to oversee that the security for the event is on point, but he and Lik get pranked by the hotel’s GM, Charles, and that damn fool, Fate, and get locked in the electric room. Charles and Fate want to get back at Szeto for tattling on their smoking, and plan to stage a fake robbery at the event that he’s supposedly neglecting. But instead of all their dumb shenanigans happening, one of the participants gets molested by a pervy guy in the dark. As the perv is trying to make his escape, Szeto and Lik come busting into the room like they’re superheroes and capture him! Turns out Lik put his burglary skills to good use and got them out of that locked electric room.

LUST & CAUTION | Terry is forced to seduce the Head Housekeeper, Chu Lo See, at the dating event because she has access to Mr. Kong’s penthouse, and he needs to get in there to find the missing diamond. After all the drama at the event, he brings her back to his room to get her real drunk. In her tipsy state, Lo See brings Terry to the penthouse to see just how comfy and big Mr. Kong’s luxury bed really is. Meanwhile, Lik is in the surveillance room acting as Terry’s lookout and sees that Mr. Kong has returned earlier than expected. He tells Terry to get the hell outta there, but too late! When Mr. Kong opens the door, Terry is standing there in the room looking like a deer in the headlights.

NARROW ESCAPE | Mr. Kong may be blind, but all his other senses are still working just fine. He immediately senses Terry’s presence in the room, but Chu Lo See steps in to claim that she’s the only one in here tidying up. After successfully escaping from the penthouse undetected, Terry claims that it was her idea to bring him there. The only reason that Lo See was able to bail ’em out was because Terry literally slapped her awake after getting Lik’s warning. Ouch. The entire night was a bust anyways because even though Terry successfully broke into Mr. Kong’s safe, the diamond was nowhere to be found. Since their plan is currently at a standstill, Lik tells Terry to move out of YM, but he’ll stay there as a security guard.

THE FOUR HEAVENLY KINGS | Now that Jan has left the Ng P.I. Firm, her dad (referred to as “George” from now on) calls up his old buddies in the biz, aka The Four Heavenly Kings. Sorry, but these guys only share the names of the beloved Four Heavenly Kings…and nothing else. Jan and Agatha are on the case of the runaway daughter, Katy, but so is George and the 4HK. Both crews follow Katy to the same park, but only Jan is able to successfully track Katy to her boyfriend’s place. From what she saw, Jan is able to deduce that Katy may possibly be pregnant. And because Terry helped Agatha in blocking George’s crew, she agrees to let him join her P.I. Firm as a freelance investigator.

GONE GIRL | The incompetent police are dealing with a new case with a Jane Doe hit-and-run victim who also appears to have been kidnapped for years. But because these guys are literally incapable of solving a case, Scarlett comes running to Szeto yet again for help. Per usual, Szeto almost immediately figures out the victim’s identity. Scarlett, using the clues that the victim once had an abortion and was hit by a taxi, is able to find the abortion clinic and information on taxi drivers that quit within the last five years. They think that the girl was kidnapped by the same taxi driver who picked her up from the abortion clinic. Anson comes to Szeto to ask him to rejoin the police force because duh, they obviously need him. Szeto tells her no way that’s happening until he clears his name from the arson case. Yeah, leave him alone!

BABYDADDY DRAMA | While following Katy for the case, Jan sees her confronting her boyfriend and his side chick. The argument gets outta hand and Katy is pushed to the ground. When Jan helps her up, Katy recognizes her from the other day and figures out that she’s been sent by her mom. Jan urges her to just go home since she’s pregnant, but Katy denies it and tells her to get lost. But the one who disappears after that is Katy…

STRANGER DANGER | Jan gets lectured by Szeto on doing a crappy job with the Katy case, but his harsh words help her remember that Katy received a phone call before fighting with her boyfriend. Tracking her phone, Jan finds the abortion clinic that Katy visited. She doesn’t get any clues there except that Katy arrived and left the clinic by herself. Seeing the cafe next door has a surveillance camera, Jan goes in to ask the owner if he saw anything that day. But while she’s chatting with him, a friendly lady tells Jan that she’s the taxi driver who drove Katy to the outskirts of town after her abortion. She then offers to drive Jan out there as well. I might have yelled, “Oh sh*t, Tavia!” at this point. On the drive to the abandoned house (seriously), Jan phones Szeto to let him know that she may have found where Katy is. Going into the house with absolutely zero backup or any fear apparently, Jan finds Katy in there, chained the the wall. While looking around for something to free Katy, she notices a photo in the room of the friendly taxi lady who drove her here. Katy then yells out for Jan to look out, and when she turns around…taxi lady with a metal pipe in her hand!