The mask is off. 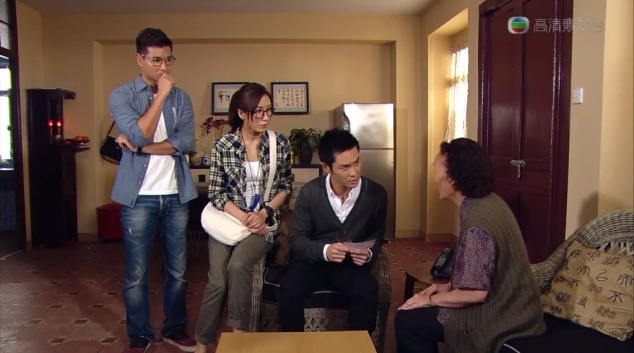 Previously on Eye in the Sky… ep 3-4 recap

One mystery solved, a million more to go. The big question of these first five episodes is finally answered, but it only leads to so many more! Anyone else guess correctly about the big reveal? I’m excited to see what other tricks Eye in the Sky has up its sleeve because the surprises just keep coming. No doubt about it, this drama definitely has its fair share of, “OMG!” moments.

SEARCH PARTY | The former midwife admits that she sold Szeto’s twin brother to the woman living next door for a measly 10,000 HKD. All she’s good for now is telling them that the family’s name is Tsang. Jeez, thanks for nothing, lady. Szeto, Jan, and Lik go to their last known place of residence looking for the twin. Both Mr. and Mrs. Tsang passed away, and no one knows where their son went afterwards. Szeto remembers that his twin set the fire to Big Bear’s drug den because he was rescuing his buddy, so if they are able to find that guy, then they might find the twin. Jan recalls that the mystery guy’s name is, “Underwear Dragon.” Worst. Name. Ever.

SNAPSHOTS | Jan’s dad claims that he’s found Underwear Dragon and brings the guy to meet them. Mr. Dragon tells them that he goes by “Shorts Dragon” and not “Underwear Dragon” (Duen Fu Long vs. Daai Fu Long). Oops. Even though the guy was a bust, Szeto and Lik discover that Jan has a photographic memory. She tells them that she’s able to recall every little detail that she’s ever seen, and Szeto’s eyes light up because now she can tell him everything about her time with his twin. Even the sexy times? She brings them back to the P.I. Firm to recreate the scene of bandaging his arm wound. Jan remembers hearing a voice in the background of Big Bear’s phone call, and it’s saying, “Dai Fu Long” (an actual name) and not “Underwear Dragon.” Ohhh…okay, that makes way more sense.

ON THE RUN | Following the name, the three of them find a house that belongs to Dai Fu Long’s grandmother. When she opens the door, she immediately thinks that Szeto is DFL’s friend, the twin. After explaining to grandma that Szeto is his older twin brother, she tells them that the twin and DFL have been friends since they were kids. Twin and DFL escaped abroad to Malaysia because DFL slept with a triad boss’s wife, so they obviously went after him. And ever so conveniently, grandma lost all pictures of DFL in the flood. Hm, grandma seemed awfully calm about her outlawed grandson. Hmmm.

NEW GIG | Szeto advises Jan to ditch her dad’s P.I. Firm because she should bring her talents elsewhere, Lebron-style. With her photographic memory, she can become really good in the field if she would just go somewhere legit. Agatha recently quit the Ng P.I. Firm because of irreconcilable differences between her and Jan’s dad, and just so happens to be opening up her own all-female P.I. Firm. She wants Jan to join her there, but she’s not ready to say yes yet.

HOME INVASION | Scarlett and the police force are stumped about a recent string of burglaries, so she asks Szeto to help her out. They go on a drive through the neighborhood where they all occurred, and Szeto almost immediately solves the case. The burglar is monitoring his targets through the hidden cameras he’s hidden behind campaign posters for an election that’s already passed. The police stake out the house that is most likely to be burglarized next, but they are as incompetent as ever because they allow the crook to escape through the back door while they’re out in front. Psh, these guys are a waste of tax dollars.

THE GREAT ESCAPE | The burglar was only smart enough to leave through the back door because his accomplice was on the lookout for him, and warned him about the police. They hightail it outta there on the back of the accomplice’s motorcycle, and drive to…DFL’s grandma’s house! When they take off their helmets, the burglar is TERRY (flirty photographer who hit on Agatha in the last ep) and his accomplice is LIK!!! He lectures Terry on being an idiot for hitting up so many houses in the same neighborhood, while Terry whines that Szeto should mind his business. During all this back-and-forth, Terry’s grandma gets woken up and yells at them for always causing her headaches, like disappearing for a year without telling her where they’re going and ya know, being burglars. Wait, she knows about that?! Then, she says it’s a good thing that Lik told her what to say to Szeto the other day or else who knows what woulda happened. Terry turns to ask Lik if he’s actually sure that Szeto is his brother…! OMG.

So, Lik really is the evil twin?! Why would he get rid of his beautiful face? That’s what I really wanna know.

How y’all know each other again?