Which will succeed in breaking the most hearts?

Although I tried to keep an open mind when watching the movie, Fleet of Time, and to not let my love for the drama, Back in Time, cloud my judgment, I still couldn’t help comparing the two. With just a little bias, I’ve assembled for you a list of comparison points between the two versions of Cong Cong Na Nian. Two things to note before we get started is that I haven’t read the book, so I don’t know which story is the “right” one and can only pick which one I preferred. Secondly, there are going to be a few (a lot?) spoilers here…so you’ve been warned!

With that being said, back into the time machine we go! 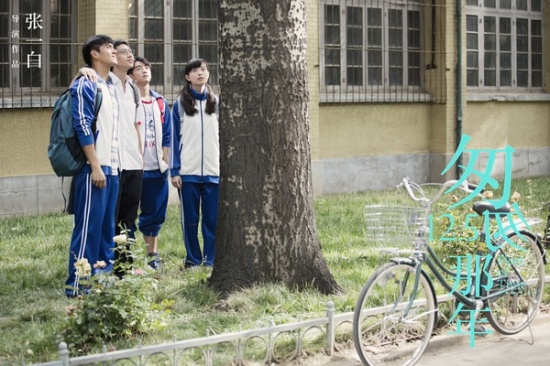 Drama: The drama starts off with Chen Xun in present day reminiscing about his youth, and it almost goes immediately into one long flashback. The entire drama pretty much takes place exclusively in the past (Chen Xun’s flashback), until the very end of the finale when we are back in the present with the characters.

Movie: Throughout the movie, a wedding photographer keeps asking Chen Xun questions about his past, and he answers them with flashbacks about his youth and relationship with Fang Hui. The plot constantly switches between the past and present, so the present day plays a much larger role here.

Winner… DRAMA. The linear format of the drama allows the viewer to follow the story from beginning to end without any interruption, save for the end-of-episode voiceovers. The movie reveals more about the present and the “aftermath,” but the constant jumping between time periods makes the main story, aka the past, lose significance.

Drama: With 16 episodes worth of time, the drama is able to include more details about the origins of the friendship and relationships between the characters. The audience is there from the very beginning for most of those things, so the story seems very natural and progresses realistically. In that sense, it really was a proper origin story for Chen Xun because we first encounter him as an adult looking back on his youth.

Movie: Nothing is ever really explained to the audience about…anything. We’re given so little information on the characters and setting that it’s difficult to understand how and why these people are friends or why Chen Xun fell in love with Fang Hui. The high school setting is also wasted here because there is virtually no tie-in between the story and that meaningful environment.

Winner… DRAMA. Perhaps due to the longer nature of an episodic drama, the story was just given more time to properly develop in Back in Time. In the movie, things felt overly rushed in a fleet of time (Ha…get it?), and attention was paid to insignificant things when it should have been focused on the main plotline.

Drama: The friendship between the main group of friends is shown in detail, and the audience is well aware of how strong it is. We see the rise and fall of this friend group, and we know what each person meant to the others. Despite all that friendship, the characters are also given their own plotlines, so that they weren’t just simply generalized as one group of friends. Yay for having lives outside of one another!

Movie: What Fab Five? The whole story is only about Chen Xun and Fang Hui, and everyone else is relegated to being extras on the side. Zhao Ye and Jia Mo were completely useless side characters that had no real significance to the story. Qiao Ran was also practically nonexistent and had less than 10 lines, or at least it felt that way. Not sure why they even bothered carving their names into the tree together…that’s just plain vandalism, not a promise of everlasting friendship.

Winner… DRAMA. Only in the drama did the group deserve the title, “Fab Five,” because the most the movie version could be called is, “Chen Xun, Fang Hui, and their classmates.” The friendship is so weak and random in the movie that they’re practically strangers, whereas they all genuinely loved each other in the drama. In the story’s most heartbreaking scene, Fang Hui’s abortion, only Chen Xun accompanies her to the hospital in the movie. Where did the other three go?! The most moving part of that scene  in the drama was the fact that the entire group was there with her. Best friends forever, clearly.

Drama: The Chen Xun & Fang Hui relationship serves as the heart of the story, and that is clear in the drama. We know the entire beginning, middle, and end of their relationship, and it’s the main catalyst for almost all the events in the drama. Fang Hui and Chen Xun as a couple may not have made sense to many, but it’s easy to identify that they were indeed together and loved each other.

The loveline between Fang Hui and Qiao Ran was a heartbreaking one, but it was still portrayed realistically. His love for her was obvious even if he never “fought” for her. Qiao Ran was the perfect second lead that you wished would win the girl, but knew that he couldn’t.

Movie: Chen Xun and Fang Hui started dating and then they stopped dating. That’s pretty much it for their relationship. We never really know why or how they are together in the first place, and I honestly didn’t really care. The love between them was definitely lacking, so when it came time for the breakup, it actually made a lot of sense.

How could there have been a love triangle when Qiao Ran was such an unimportant character in the movie? Just like how Chen Xun never really seemed to love Fang Hui, the same could be said for Qiao Ran. After he’s rejected by her the first time, he just stops trying. Maybe he still cared for her, but it certainly didn’t show.

Drama: Back in Time gave one of the most heartbreaking endings I’ve ever seen because it’s so ambiguous and open-ended. It ends with Fang Hui “disappearing” from everyone’s lives after her abortion, and she never regains contact with them. In present day, the other four friends are still waiting and hoping that she’ll return. But will she?

Movie: Fang Hui similarly disappears, but Chen Xun finds out that the nosy wedding photographer asking him all the questions is actually Fang Hui’s sister. On a copy of the wedding video she left him, she purposely includes footage at the end of her sister happily living abroad in France. Qiao Ran also tells Chen Xun that he had also seen her there.

Winner… MOVIE. I’m a big fan of happy endings, and the movie was able to give me that. Because we know that Fang Hui is alive and well, everything ends on a much more optimistic note. In the drama, we’re left wondering what happened to her and where she is, so it’s open for interpretation. Although I want to believe that she will return to the group in the future, the open-endedness allows for too many other possibilities. 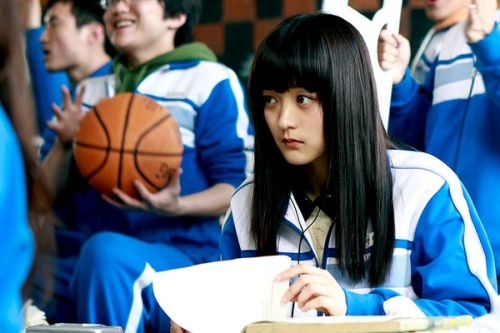 Drama: Almost all of the actors in the drama were unknown or new, but they still managed to give inspiring performances. They truly brought their characters to life, which helped the viewer really become invested in their story. Everyone looked and played the part perfectly. There really wasn’t a single disappointment amongst the cast here.

Movie: The movie boasts a much more famous and experienced cast, with Eddie Peng and Ni Ni headlining. That being said, you wouldn’t know that based on their performances. It was clear that nobody was giving it their all in their respective roles, and it certainly came across as really lazy acting. Maybe they knew how ridiculous they looked as a bunch of 30 year old adults playing teenagers, so they just didn’t bother to try.

Winner… DRAMA. I’m sorry, but Eddie Peng and Ni Ni’s good looks just aren’t enough to compensate for everyone’s lackluster acting. I honestly think it was a mistake in choosing these actors simply because everyone looked so damn old! You’re trying to convince me that Eddie Peng is 16…really? Here’s an idea, they should have had the drama actors play their roles in the movie!

Drama: This is really just another excuse for me to praise the cinematography of Back in Time because it’s really that beautiful. Everything from an aesthetic standpoint, the colors, costumes, camerawork, all worked harmoniously together to make a drama that’s tinged with nostalgia and beauty in every frame.

Movie: The cinematography in Fleet of Time was also beautiful, but in a different way. It also had the faded and slightly out-of-focus look to it, but there were perhaps one filter too many on it. But because of the resources that movies have over dramas, there were better costumes, scenery, lighting, and camerawork.

Winner… TIE. Both the drama and movie were beautiful to look at, just in different ways. It’s like comparing Instagram filters: all pretty, but for different things. If I really had to choose, I’d probably still pick Back in Time to win this one. 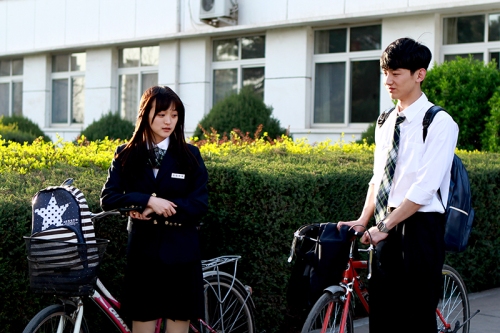 Drama: The main poster for the drama was cute and pretty, but there weren’t that many similarly pretty promo pics to go along with it. For its promotion activity, Sohu had famous celebrities (e.g., Han Geng, Nicky Wu, Zhao Li Ying, Chen Xiao, etc.) reflect on what youth means to them. As for its theme song, “Yi Lu (One Road),” it was performed by the three main actors of the drama.

Movie: There was an abundance of promo pics and posters for the movie that were all absolutely gorgeous. It certainly helped that the movie’s stars were constantly posting them to their social media to promote it. Fleet of Time was also shown in several cities across the U.S., Canada, and Australia so fans outside of China could watch the movie. The movie’s theme song, “Cong Cong Na Nian (Fleet of Time),” was performed by Faye Wong.

Winner… MOVIE. It’s hard to beat the movie on this one because they simply had more resources to do the heavy promotions. And c’mon, they got Faye Wong to sing the theme song! Sorry boys, y’all had a lovely song but you just can’t win over Faye. It was also a great PR move to have the movie in theaters in countries outside of China so more people had access to watching it.

While watching the movie, I was fully prepared to drown in a puddle of my own tears because that’s what happened when I watched the drama, but it never happened. Even the very specific scenes that I was waiting for to break my heart (e.g., Qiao Ran’s essay, Chen Xun & Fang Hui’s breakup, Fang Hui’s abortion) just didn’t. Although the story remained mostly the same, the emotions just weren’t there in the movie. When I realized that I didn’t have the same emotional attachment to the story or characters in Fleet of Time that I had with Back in Time, I knew which was the better one for me.

Perhaps if I didn’t watch the drama first, or at least not right before the movie, I’d be more capable of appreciating the movie’s merits. But alas, like Qiao Ran learned: The first love is the one that stays with you, and it will always be difficult to replace. 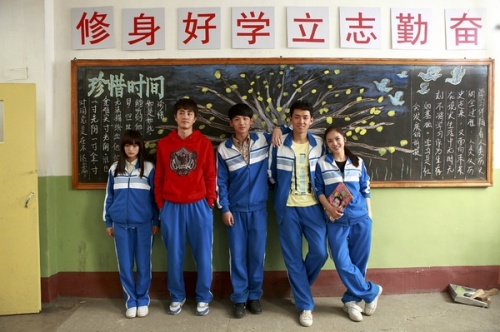 Catch up on Back in Time/Cong Cong Na Nian with the episode recaps!

If you’ve seen Fleet of Time as well, let me know how you liked it! And if anyone has read the original book, I’d love to hear how it differs from the book and movie adaptations. Is the book always the best?