Time to wake up from the dream.

I think I can confidently say that out of all the friends’ relationships, Jia Mo and Zhao Ye’s is my favorite. Their bantering, teasing, friendship, love all feels genuine, and it’s easy to identify with them. I like them, and I root for their success. But dramas like to play their cruel jokes on us viewers, and the one they played here was straight-up tragic and unfair. There’s no mistaking that they’re out of the safe confines of their youth now. I want to believe that there will be a rainbow after this rain, but I’m not sure when the rain in the drama will stop.

While Zhao Ye’s waiting to pick up Jia Mo, he practices how to give the ceramic figurines that he painted for her. But before he can figure it out, he’s so surprised to see Jia Mo looking super cute in a dress that he becomes momentarily speechless. He quickly regains his cool though when Jia Mo asks him for his male opinion on her dress. Wouldn’t want her to see you drooling, right? He tells her that she looks just whatever in the dress, but claims it’s only because he has super high standards. He contemplates for a second if he should give the present to Jia Mo, but decides against it. Just do it already, dude! 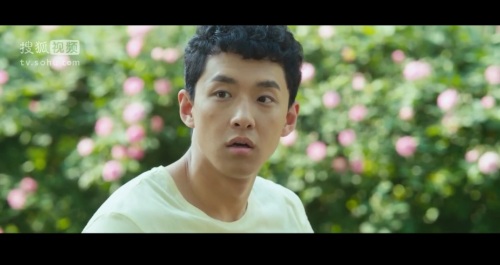 They meet up with Fang Hui and Chen Xun for Su Kai’s homecoming dinner. When Jia Mo sees Su Kai, all those feelings that she once had for him come rushing back. As he’s telling them about college and what he’s been up to, Jia Mo is hanging onto his every word. This definitely doesn’t go unnoticed by the rest of the group, especially Zhao Ye.

After dinner, Su Kai offers to take Jia Mo home on his new motorcycle, and she’s lovin’ it. Chen Xun notices Zhao Ye looking a little bummed out, and quickly figures out what his bro’s thinking. He reminds him that if he doesn’t make a move for Jia Mo soon, it’s going to be too late. Zhao Ye says he already told her before how he felt (not exactly…), but Chen Xun tells him that there’s no rule that says you can’t tell her again. Even if she did just leave with Su Kai, Zhao Ye is sure that everything will be fine.

When Su Kai drops Jia Mo off at her place, she hesitates to leave and asks him if he’s going to be busy during the next few days. She casually throws in that he’s probably going to be hanging out with his girlfriend. Testing the waters, duh. She asks him if his gf is also back in town, which prompts Su Kai to tell her they broke up almost a year ago. Jia Mo tries to comfort him, but Su Kai isn’t holding any grudges against his ex-gf because he knows that as people get older, they will inevitably change.

Jia Mo doesn’t agree with Su Kai that people will always change, so she uses herself as an example. She tells him that she’s still the same person as before. While she’s listing the stuff that she still likes, Su Kai suddenly leans in and kisses her! I’m guessing that “Su Kai” was also on that list. He asks her if she’ll be his girlfriend. They hug it out, so the answer was probably yes.

Zhao Ye is once again practicing his love confession, but gets interrupted by Jia Mo’s arrival. She awkwardly tells him that she has something to tell him, and he excitedly thinks that she’s going to tell him she likes him. He even tells her that obviously the guy needs to say something like that first. But before he can get the words out, Jia Mo blurts out that she and Su Kai are together. Zhao Ye’s heartbreak is written all over his face when he hears it. Can you blame him? That’s rejection #2 now…sigh.

During dinner that night at the cafe, Zhao Ye is drinking himself drunk. Everyone around, except Su Kai, can see that he’s hurting. When Jia Mo and Su Kai leave together, Fang Hui and Chen Xun as tasked with taking care of a very drunk Zhao Ye. While they’re on the streets looking for a cab, they see the group of guys that Su Kai has fought before. Uh oh. 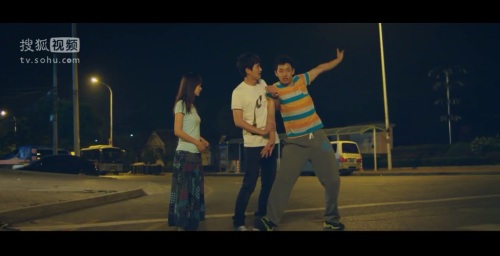 As Su Kai and Jia Mo are walking home, that very gang comes up to them and start their taunting. To be honest, half of those “gangsters” look like lame middle schoolers who should be home playing computer games instead of terrorizing the streets. They keep up with the smack talking, and their leader goes up to bother Jia Mo. Su Kai immediately pushes him back, but before a fight breaks out, Zhao Ye appears out of nowhere to smash a brick(?) over the guy’s head. OH DAYUM. Chen Xun and Fang Hui come running after Zhao Ye and see the aftermath of the head-smashing. 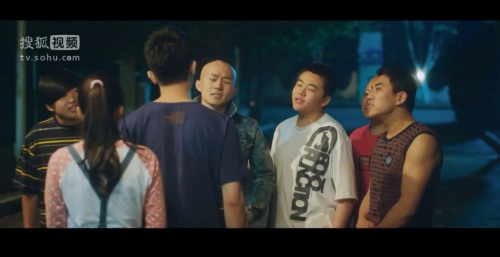 Just get outta there!

The five of ’em quickly make a run for it, and only stop when Jia Mo can’t run in her heels any longer. Zhao Ye kicks off his sneakers and tells her to wear his shoes. She refuses at first, but Su Kai insists that she should wear them. Hello…why didn’t he offer his own shoes to his girlfriend? Zhao Ye’s all pumped with adrenaline, and vows to show those gangsters who’s really the boss the next time they show their faces. Shhh, don’t say that! They make their way home without thinking much about what just happened. 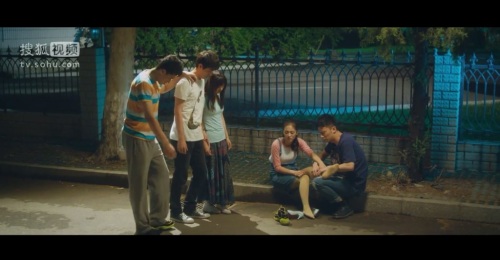 Still a gentleman even when drunk.

The next day, everyone receives their college acceptance letters. It looks like Chen Xun and Fang Hui will indeed be going to Tsinghua together. Zhao Ye is also busy celebrating his acceptance with his parents and the mailman who delivered the letter. But before he can even walk back into his house with the letter, two police officers come strolling up to ask Zhao Ye to come with them. They slap the handcuffs on him and arrest him for assault. NO! Free Zhao Ye!

You’ve got the wrong guy!

Zhao Ye’s being held without bail, and there’s nothing that anyone can do to help him. Jia Mo is panicking and even suggests to Su Kai that they break him out of prison. She feels really helpless that Zhao Ye is in this situation because of her, and hates that she can’t do anything for him. She tells Su Kai that he’s one of her best friends and feels guilty that she’s responsible for this. Is he really just a friend though? The only thing that Jia Mo can do during this time is vigorously clean Zhao Ye’s sneakers that he lent her that night. Yup, the tears are starting.

I have to save him.

Chen Xun gets word that it’s very likely that Zhao Ye is going to be sent to prison for this. He, along with Fang Hui and Jia Mo, go to the hospital to apologize to the gangster guy that Zhao Ye injured. The nurse tells them that he’s been discharged, and then they see the guy sauntering out of the hospital. Da hell?! When Chen Xun sees that the guy doesn’t look heavily injured at all, he becomes enraged that he was lying all along. Despite Fang Hui’s pleadings for him to calm down and be rational, he runs after the guy.

Chen Xun catches up to the gang at a basketball court. He approaches the guy and says that since he doesn’t look all that injured to him, he’s here to make sure that the injuries become real ones. Leader guy threatens Chen Xun that if he actually does hit him, he’ll make sure that Zhao Ye is in prison for an extra 10 years. Argh, what to do! Weighing his options, Chen Xun does the selfless thing and kneels down to apologize for Zhao Ye. But the apology falls on deaf ears when the guy just laughs at him and leaves. Ugh. Shoulda just punched him. 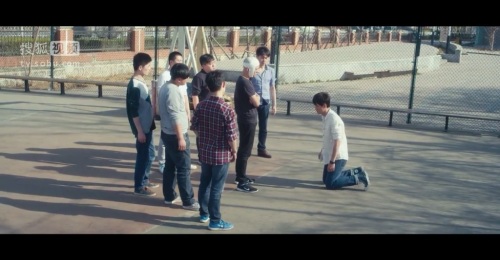 Please let go of my friend.

The day of Zhao Ye’s sentencing comes, and he looks absolutely terrible when he’s brought out by the guards. The judge announces that he’s been found guilty of the assault charge and is sentenced to 18 months in prison. His mom immediately faints upon hearing the sentencing. Chen Xun, Fang Hui, and Jia Mo immediately start yelling that they object, but it’s no use because Zhao Ye is already being dragged away. As the guards take him away, he calls out to his parents and then yells, “Lin Jia Mo, I like you!” Ahhh, I completely lost it here. SO MANY TEARS. As if it wasn’t sad enough, they gotta play a montage of Zhao Ye and Jia Mo moments. TEARS AGAIN.

After Zhao Ye’s sentencing, Su Kai and Jia Mo are walking by themselves when she refuses to take his hand. She tells him that he used to be just a dream of hers, but this dream was too short. It was so short that she didn’t even have time to do anything before she woke up. She finally agrees with what he said about things inevitably changing, and that there are some things that changed without her even knowing. Su Kai is very understanding in the breakup, and tells Jia Mo that he just wants her to know that he genuinely likes her. He asks if they can still be friends, and she shakes the hand that he held out.

Chen Xun, Fang Hui, and Jia Mo are at Zhao Ye’s house that night to help his parents clean. His dad comes up to Jia Mo and says that he found a box in Zhao Ye’s room that looks to be for her. When she opens the box, she sees the ceramic figurines that Zhao Ye painted to look like him and her. 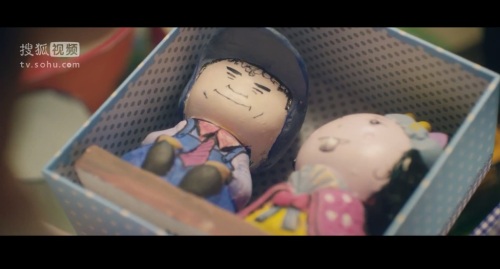 To my beloved Jia Mo.

Jia Mo’s voiceover says that the two hardest things in love is when you don’t love the person who loves you, and the person you love doesn’t love you. Whichever way you look at it, there are three people who will get hurt. In everyone’s youth, there are bound to be some regrets. But these regrets accompany them as they grow up, and they learn to not miss out on the people that they shouldn’t miss out on.

Excuse me while I go cry my eyes out.

Jia Mo asks Su Kai for help when Zhao Ye is arrested. When Su Kai asks his dad to help him out, he refuses because Zhao Ye isn’t his son. He tells Su Kai that if he insists on getting involved, then he can get the hell out of his house.

Jia Mo finally calls Qiao Ran to tell him about Zhao Ye when Chen Xun’s apology to the leader guy failed. One of the saddest scenes in the episode, for sure. Everyone’s in tears and you can just feel their helplessness.

When Su Kai comes to the courthouse after Zhao Ye’s sentencing, he sees the leader guy and finally punches the guy in the face. Not very wise, but it was a damn well-deserved punch.

The end credits song for this episode is by Du Wei Han (Zhao Ye) and appropriately named, “I Like Girls Like You.” Yeah, you bet I cried through all four minutes of it.

There’s no other girl but Jia Mo.