Taking the high road with a giant leap of faith. 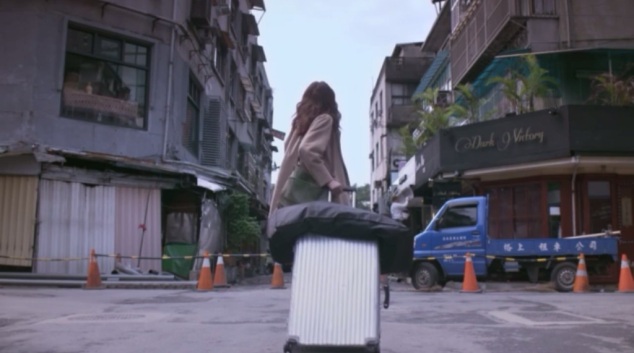 Goodbye to the past.

Hai Ning might still be reeling from Cheng Hao’s betrayal and the breakup that came from it, but she may have really dodged a bullet with that one. Sure, it may hurt now, but think about all the doors that have just opened up for her! Hopefully, it’s sooner rather than later that she comes to this realization.

After getting rid of both potential husband candidates, real and fake, in Cheng Hao and Alex Chao, Hai Ning is ready to start anew. She drags a suitcase of Cheng Hao’s stuff to his place because she’s polite and didn’t just throw it all out like I would have. When she gets to his place, she’s forced to put on a fake smile. They make some awkward small talk, like Cheng Hao asking for his passport. When he takes the suitcase for her, he comments on how heavy it is, and she’s like, “Duh, 9 years!” Awkwarddd. Cheng Hao then grossly tries to apologize for hurting her, and says that if he’s willing to do anything for her if she needs it. She tells him to just turn in a good book draft. Keepin’ it professional, I see.

Let’s get this over with.

Cheng Hao tells Hai Ning to wait a second while he goes to retrieve her headphones that he mistakenly took as his, and also gives her a scarf in her favorite blue color. Hai Ning tries to refuse it and reminds him how he wrote before that you should never be too nice to your ex. She even tells him that he should save it for Pei Pei, the homewrecker. Cheng Hao insists that she take the scarf and even puts it around her neck for her. Ew. When he asks about if she thought about him leaving the publishing company, Hai Ning gets upset and asks him if he really has to take away both love and work at the same time. She finally turns around to leave, but as she’s walking down the stairs, she hears his door close and lock. That’s why she loses it, and bursts into tears. But in one last “FU” to Cheng Hao, she leave his stupid blue scarf on the stairs. Good riddance!

She doesn’t need your cheap scarf.

As Hai Ning is walking down the street, still teary-eyed, Zhong Wen comes biking by on a delivery and calls out her name. Hai Ning is clearly not in the mood to chitchat with him though. In the meantime, Cheng Hao is bumming out and Pei Pei tries to comfort him. She thanks him for allowing her and the baby to have a home. 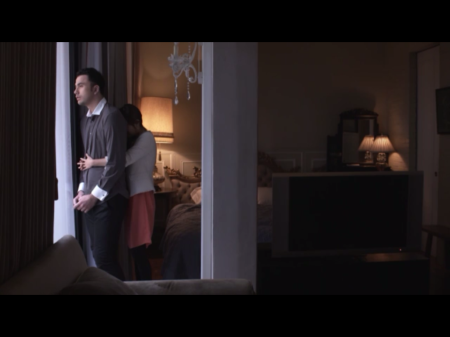 No one to blame but yourself.

Hai Ning is in full breakup hangover mode, complete with sunglasses indoors, and isn’t looking forward to reading the stacks of letters from someone responding to her marriage ad. Apparently this one dude doesn’t like the cold interaction from chatting online, and would rather write her a letter every single day. Crazy alert. Hai Ning tells her secretary that she wants to hit pause on the blind dates for awhile because her house is a mess, so she wants to figure out that situation first. Sure, sure. Her secretary still convinces her to go one a few more dates, especially the letter-sender or else who knows what he might do.

Hai Ning puts on a brave face (but still with the sunglasses on) and sits through a few more dates, including one with a guy who takes off his prosthetic leg to show her how much he was willing to sacrifice for his last girlfriend. When she gets fed up with how all her dates treat her like a psychiatrist, she decides that she’s going to do that herself with her next date, Bao Luo the Letter-Sender. 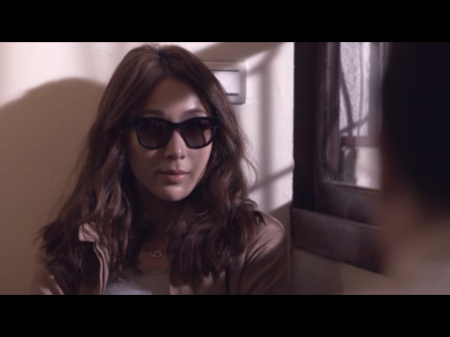 Too cool for this.

After ranting to him about Cheng Hao and Pei Pei, Hai Ning tells Bao Luo that she showed up for this date, so he better stop sending letters to her. She lies that she’s only out here going on blind dates because her parents want her to get married. Instead of just going away quietly, Bao Luo yells at her for being insincere and wasting his time. Hai Ning tells him to lower his voice, but he just yells even louder and storms out of the restaurant. Well, it is kind of rude to keep your sunglasses on inside a restaurant.

I ain’t paying for this meal!

Hai Ning goes to Tian Xin to vent, but per usual, the conversation quickly turns to Tian Xin and her own relationship problems. She tells Hai Ning that she’s decided to break up with her boyfriend/babydaddy. As for the baby, she still doesn’t know what to do about it yet because Tian Xin is more preoccupied with finding a rich dude.

After that disastrous date with Bao Luo, Hai Ning asks her team at the publishing company if they should maybe push back this whole “marriage seeking” book idea. They tell her no way since they’ve already invested so much time into it. One of the employees brings up Cheng Hao and asks how his book is coming along. When the conversation about Cheng Hao doesn’t end, Hai Ning is forced to tell them all that he’s no longer their responsibility because he is cancelling his contract with the company.

Hai Ning writes a letter to Bao Luo, inviting him out to meet her for coffee. I guess he doesn’t believe in texting either. She apologizes to him for being so rude to him last time. When she asks him about himself, he launches into a speech about his past as a political activist. He met some girl during that time, but she totally broke his heart when she decided to dump him to marry a rich guy. Hai Ning doesn’t buy it when Bao Luo tells her that he doesn’t hate her. Bao Luo says that he considers it a sign from the universe that he needs to go out to find a new direction for his life. In the middle of their conversation, Bao Luo suddenly spots some loansharks that are looking for him and bolts outta there ASAP.

All of the publishing company’s employees are pacing around the office waiting for Cheng Hao because he said he wants to meet up with them to discuss something. He asks them if Hai Ning told them what happened, but they tell him that she’s not the type of person who discusses her personal matters at work. Knowing that that’s probably what happened, Cheng Hao fesses up to them that Pei Pei is pregnant and that’s why he and Hai Ning broke up. He thanks them for helping him in the past and hopes that they’ll continue to look after Hai Ning in the future. Okay, bye Cheng Hao.

Hai Ning and Tian Xin are out shopping for beds, and Hai Ning is trying to be optimistic in saying that she can now sleep on whichever side of the bed she wants. Xian Tin asks her if she’s ever played the game where she imagines who she wants to spend the rest of her life with, and when she opens her eyes, she’ll see that person. Poor Hai Ning though because when she tries it, she first sees Cheng Hao and then…Bao Luo. Ehhh, is there anyone else?

Where did they get those eye masks from?

Bao Luo gets caught by his “loansharks” because it turns out that he has some major credit card debt going on. At the bank office, he runs into his old classmate. She takes him out for some food, and she keeps dropping hints about how she really idolized his passionate spirit during their school days. Bao Luo says those days are long behind him and that he wants to find a steady job. The girl casually asks him if he wants to settle down with someone, and he says if he runs into the first person. She seems quite pleased with his answer. 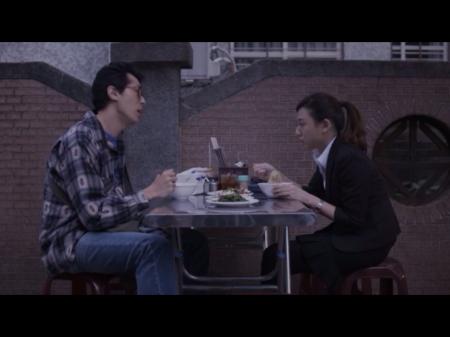 At the bookstore that Bao Luo is now working at, Hai Ning goes to visit him. He tells her that reason why he wanted to see her is because he wants to tell her that he already has someone he likes. Hai Ning looks a little to be happy to be rejected by him. He tells her that the people who hurts you allows you to find someone who is even better you. That’s actually one of the things that Cheng Hao had written about in his books. Ugh, just can’t escape that guy. But on a happier note, Bao Luo and Hai Ning agree to stay in contact and be friends.

When Tian Xin and Hai Ning stop by her favorite cafe after shopping, who should they run into but Cheng Hao and Pei Pei. See what I’m saying about how you can’t escape the dude? It’s obviously super awkward when Cheng Hao and Hai Ning greet each other. Pei Pei, thankfully and smartly, stays behind and doesn’t try to approach Hai Ning. Cheng Hao tells her that he’s playing to travel abroad for awhile. Who cares? Hai Ning wishes him safe travels and that he and Pei Pei are happy. Meanwhile, Tian Xin is sitting there rolling her eyes. I get ya, girl. But Hai Ning is trying to show how gracious she is in this breakup by talking a good game about how she thinks this will all work out, how she’s glad for Pei Pei, and that she will be done with this relationship once and for all. Sure, you can talk the talk…but can you walk the walk?

Out bike riding one morning, Hai Ning comes across Zhong Wen organizing a bunch of framed photos. She compliments on one of the pictures, and he tells her that he actually took all of them himself and he’s setting up for an exhibition in a coffee shop. He tells her about one of the experiences he had when he was traveling around Taiwan for the pictures. He definitely flirts with her a little and gifts her with one of the pictures.

Are these for sale?

Hai Ning is busy tidying up her hot mess of an apartment by herself when the other employees from the company come by to help her. Together, they literally tear down the wall in her apartment, while Hai Ning figuratively tear down the last remaining foundation she had built with Cheng Hao. She thinks to herself of what Bao Luo told her about there are always going to be walls that you can’t take down, so why waste your time on them?

Tear down that wall.

After his awful date with Hai Ning, Bao Luo sent even more letters to the publishing company to complain about what a terrible person she is.

When Cheng Hao came to the office to explain himself, Bei Bei tells him that if he insists on bringing them food next time, don’t include her because they aren’t friends anymore. Girl’s got her loyalties. 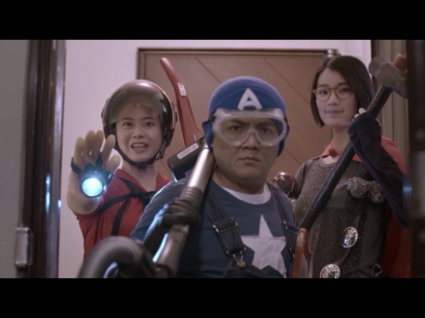