When the host ditches her own party…then you know it’s not worth going to.

Totally not waiting for Feng Teng.

All it took was a little international travel to reassure Feng Teng that Shan Shan really does like him and not Zheng Qi. But is that what’s really happening here? Even if Shan Shan doesn’t know it yet herself, her heart is most definitely leaning towards Feng Teng more and more. Lesson for all: if you wanna change your relationship status from “it’s complicated” to “in a relationship,” just borrow Feng Teng’s method of going abroad and chillin’ in Korea for a couple of days. So easy, right?

Congrats, Shan Shan! You’re officially an employee at Windgroup! I’m not the only one sending out congratulations to our girl because after just finding out herself, she immediately receives a text from Feng Teng congratulating her. Something tells me that he’s not sending out texts to all the other new employees. Shan Shan just can’t accept the fact that Feng Teng is being nice to her, so she’s all suspicious that this is another one of his tactics to get her to come back to be his officially food-picker-outer.

Text him back, girl!

Her first task as an official Windgrouper is to confront that rude-ass coworker from the last episode that gave Shan Shan so much grief in the last episode for being friends with the boss. Shan Shan tells her to back off since she’s an official employee now, and that she got this job on her own rather than rely on any type of connections. The rude-ass coworker continues to live up to her to name and remains just as rude and stuck-up. Luckily, Zheng Qi to the rescue! After congratulating Shan Shan, he gives her the test version of the company’s app for her to try out, since she helped give him new ideas for it last time. Shan Shan is obviously thrilled that he’s only letting her test out the new app.

How everyone looks at Zheng Qi.

Shan Shan offers to get coffee for Zheng Qi from the kitchen because he’ll be late for his meeting otherwise. While she’s chatting with Du Fan there, a bunch of her nosy coworkers literally surround and corner her to find out whether she’s actually close with Feng Teng or Zheng Qi. Do people at this office do any real work? Shan Shan keeps denying that she’s friendly with either one of them, but her damn coworkers just won’t take “no” for an answer. As they keep yelling and pushing Shan Shan to answer their questions, Du Fan steps in to loudly proclaim that Shan Shan is his girlfriend. Of course, Zheng Qi happens to arrive in the kitchen at that exact moment to hear Du Fan’s declaration. Shan Shan is clearly mortified and desperately tries to shake her head in denial.

You people got nothin’ better to do?

Zheng Qi tells the huge group of people in the kitchen to STFU and clears things up for Shan Shan. He tells all those busybodies that she has no particular relation with Feng Teng, but even if she did, it’s none of their goddamn business. For some reason, hearing one of their bosses telling them to drop the subject doesn’t actually make these people stop yelling at Shan Shan. In all of the commotion, Shan Shan tries to escape but ends up tripping over someone’s shoe. And who should she trip right in front of? Feng Teng, of course.

Feng Teng helps Shan Shan up and then demands that she follow him to his office. Uh oh. Feng Teng refuses to let her take the same elevator with him, and makes her take the one after. Before Shan Shan goes into his office, his secretary tells her that she’s glad that she’s here for lunch again because Feng Teng has been really sad and moody ever since she stopped coming to eat with him. Awww, cute!

After hearing this, Shan Shan goes into his office and thinks about how the secretary also said that today is the saddest that she’s seen him in awhile. She decides to cheer him up by helping him pick out the unwanted foods from his lunch. She tells him, however, that this is the last time she’s going to do this and that if he really doesn’t like certain foods, he should tell his chef at home. That’s so not the point, Shan Shan! 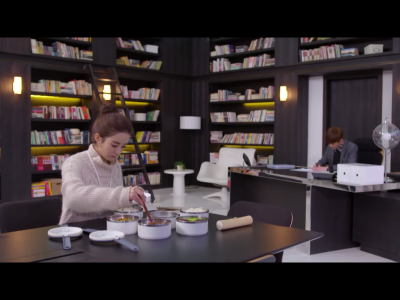 While Feng Teng is thrilled that Shan Shan is having lunch with him again, there’s still one little thing that’s bothering me. He tries to act casual when asking Shan Shan if Du Fan really is her boyfriend, but you know that he’s actually super nervous. Shan Shan tells him that Du Fan only said that earlier because he was trying to stop her nosy coworkers from gossiping about her. But when Feng Teng follows up by asking who it is that she’s having gossip with, Shan Shan ultimately says that it’s Zheng Qi and not him. All of a sudden, this lunch ain’t tasting so great to Feng Teng anymore. Hmm, I wonder why.

When Shan Shan tells Liu Liu and her roommate what happened at work, Liu Liu tells her that she needs to immediately text Zheng Qi before he really does believe that Du Fan is her boyfriend. True that. But before Shan Shan is able to do that, she receives a company email about a new rule being implemented that forbids office romances. The rule clearly came as a result of all that drama in the kitchen earlier.

Meanwhile, Zheng Qi and Feng Teng are at the basketball court when Zheng Qi receives the same email. He obviously makes the connection that Feng Teng randomly made up this rule because he really thought Du Fan was Shan Shan’s boyfriend. Nah, wrong guy. Feng Teng says forget about Du Fan because he heard that it’s Zheng Qi that’s been rumored to be with Shan Shan. Zheng Qi laughs this off, and claims that it’s Feng Teng that’s been the subject of the rumors. He imparts some further classic Zheng Qi wisdom on him by telling him that he needs to work harder to pursue Shan Shan or else someone like Du Fan might really swoop in and steal her from him. Seriously, man…just tell her you like her already!

Is this your doing, bro?

The next day at work, Shan Shan is contemplating whether or not she should give Zheng Qi the invitation to her and her roommate’s Christmas party. But before she’s even been in her chair for five minutes, her super annoying coworkers ask if she’s had a fight with the boss and that’s why he implemented the no dating rule. They beg her to speak to him about it because with the rule, they have no chance of finding a boyfriend or husband at Windgroup. Seriously, no work will ever get done at this company. After being peer pressured by these desperate gals, Shan Shan agrees to ask Feng Teng to reconsider the rule. 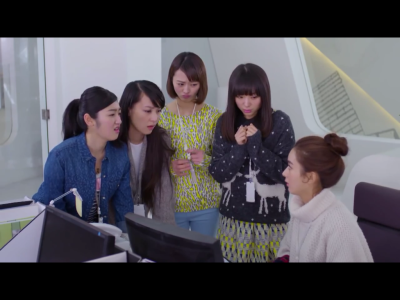 When Shan Shan finally gathers up her courage to talk to Feng Teng about the no dating rule, his secretary tells her that he and Zheng Qi are both in Korea to scope out a rival company that they might buy out. Shan Shan is obviously disappointed by this because now she won’t get the chance to invite Zheng Qi to her party. Before she leaves though, Feng Teng happens to call his secretary for info on that Korean company. The secretary tells him that Shan Shan is here looking for him because she’s thinking about him. Feng Teng is speechless after hearing this, which is uber cute. But poor Shan Shan is freaking out on the other side because she definitely did not say that. She runs out of there, covering her face in embarrassment. 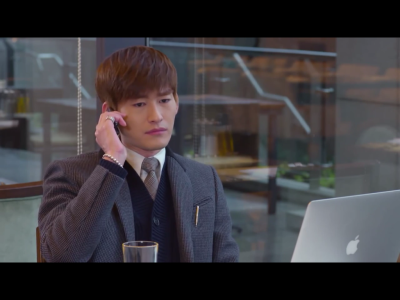 On the day of the party, Shan Shan is leaving work late because she was nice enough to do all of her coworkers extra work for them since they also had parties to go to. I guess without Zheng Qi there, Shan Shan didn’t really care about her own party. When she’s walking home, she coincidentally stops by Feng Yue’s bookstore’s opening night. Feng Yue takes her aside to speak on behalf of her bro, and tells Shan Shan not to ignore Feng Teng because of Du Fan. Shan Shan is impressed that Feng Yue knows everything that’s happening at Windgroup even though she doesn’t work there, and reassures her that Du Fan isn’t her boyfriend.

Never getting off work.

By the time she finally gets home for the party, Shan Shan sees Liu Liu sitting on her doorstep instead of inside with everyone else. It turns out that Liu Liu was reluctant to invite her boyfriend to the Christmas party because they have been having problems in their relationship and on the verge of breaking up. The two of them bail on the party and instead go chill on the basketball court that Feng Teng and Zheng Qi always go to. Why is this basketball court always so empty? It’s like the go-to place for heartfelt conversations. 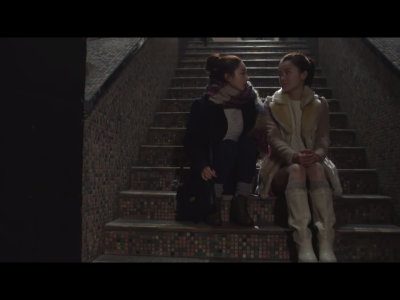 After Liu Liu tells Shan Shan about her decision to break up with her boyfriend, Shan Shan shares that she’s upset too because she had heard rumors about Zheng Qi dating some Korean celebrity and how she doesn’t think that she’ll ever be good enough for him. She too makes up her mind that she shouldn’t be distracted by him and dating in general, and instead will only focus on work from now on. Shan Shan declares that she’s over her crush on Zheng Qi. If the Zheng Qi crush is over, does this mean she can now crush on Feng Teng? Please say yes. 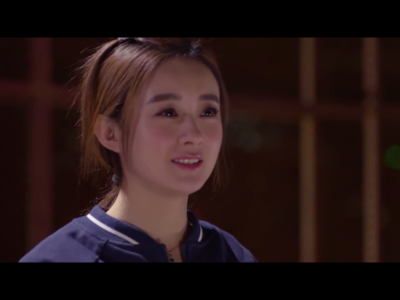 What Else is for Lunch:

When Feng Teng sent Shan Shan the congratulatory text about becoming an official Windgroup employee, he was anxiously waiting by his phone for her reply. She never texted him back, so that’s probably why he was in such a bad mood that day. Cute!

Feng Yue asks Feng Teng if he wants to invite Shan Shan to the bookstore’s opening, but he says that he has to go to Korea to “calm down and think about things.” When Feng Yue asks if he’s referring to the rival company in Korea or Shan Shan, Feng Teng tells her that it’s not good to be so smart all the time. Obviously, he was talking about Shan Shan! 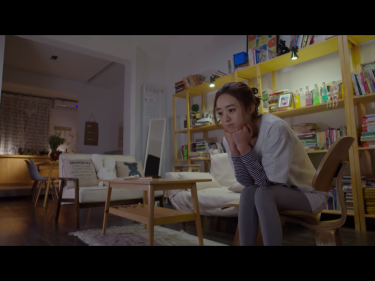