We left our leading man and lady in the middle of nowhere in the last episode, and unconscious to boot. How will they fare when they wake up? What new events will be thrown at them to give their romance a jolt? Will Hae Soo find out about the truth about her cheating boyfriend and backstabbing friend? Read on to find out! Let’s go!

We resume this episode with Jae Yul returning home after a visit to the hospital. He reads a note from Hae Soo asking for his bank account so she can repay him. He laughs at the ridiculousness of the situation and throws the crumpled paper on the ground with a fit of anger. However, not before he walks away he picks up the note and decide to make a call to Hae Soo using the number listed.

Hae Soo picks up and demands to know what he wants. Jae Yul requests to see her again, but she just hangs up. Jae Yul, unaccustomed to this type of treatment, grumbles a bit.

Hae Soo walks into the hospital and is immediately alerted to a situation with Yang Soo Min, the patient she tried to stop from leaving the day before. Turns out as soon as the patient went home she tried to commit suicide. Hae Soo angrily yells at the crying mom for her incompetence, and Lee Young Jin sends Hae Soo out the door. Young Jin decides that Hae Soo needs therapy and calls up Dong Min to get him to counsel Hae Soo. 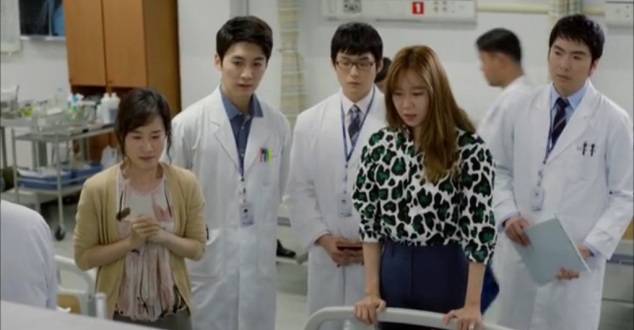 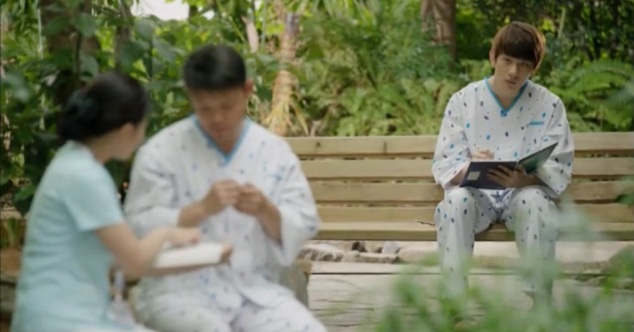 Back at the publisher’s, Jae Yul and his team are figuring out how to deal with the situation at hand. Jae Yul suddenly makes a revelation that there must be an inside mole, because there is no way Pul Ip could have memorized every single word even if he had read it to her. Tae Yong, Jae Yul’s long time friend, looks a bit tense and starts to defend himself even though no one really accused him yet.

what else is this girl gonna copy?

Tae Yong is also in charge of finding Jae Yul a place to stay at temporarily in order to avoid the media outside his residence. Tae Yong tries to entice Jae Yul in going to a rental home by saying there are also two psychiatrists and an individual with Tourette’s syndrome living there, and that this would be a great premise for his next novel. Jae Yul remains unconvinced until he views a video of his potential roommates and sees Hae Soo among them. As soon as he saw her, he is all aboard.

Before he leaves, Jae Yul tells Tae Young to get in touch with Pul Ip, but Tae Young says he is having difficulty with that and it’s not like he knows where she lives.

Except he does. Jae Yul borrows Tae Young’s car and notices that the last address in the GPS is indeed Pul Ip’s.

Jae Yul arrives at his new home, and Hae Soo answers the door with her wet hair in tow. She is extremely shocked (and can I say unpleased?) at his sudden appearance, but Jae Yul is quite impressed with himself. He gets to his room, which is … EXACTLY the same as his home, down to the bathtub and the curtains.

who can resist this face at the door?

Soon enough Soo Kwang and Dong Min come by to say hello. Soo Kwang quickly throws out some deets about himself (name, age, gender) and a short explanation about Tourette’s which ends with “look it up on the internet if you want to know more.” Dong Min tries to compensate by telling Jae Yul a little more about Soo Kwang and implies that everyone is a little more considerate to Soo Kwang because of his condition.

After the other two leaves, Hae Soo visits and basically tells Jae Yul he has OCD. He runs off to her room and opens the door to look inside. He comments that she is quite messy, and tells her that he will reciprocate whatever he receives, which is why he barged into her room (since she went into his). She asks cooly “so who plagiarized whom?”

Jae Yul walks a bit closer, grabs her pinky and picks out a piece of apple stuck between her teeth. She is obviously embarrassed and walks away quickly.

Hae Soo is in therapy with Dong Min, who is trying to get her to talk about her mommy issues. Apparently she experienced some sort of childhood trauma but she refuses to discuss it. 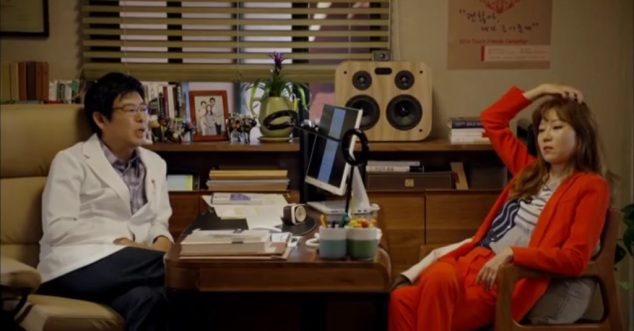 Meanwhile Jae Yul arrives at Pul Ip’s house and Tae Young hides by hanging out her window. Under pressure Pul Ip finally gives in and more or less admits to plagiarizing his book. She goes on to blame Jae Yul by saying if he had ever read her manuscripts she wouldn’t come to this. Jae Yul shoots back and tells her he HAS read them and they are all plagiarized so he never mentioned anything. She moves on to compare their relationship to a purely physical one and that she was nothing but a sex partner. Instead of being offended, Jae Yul thanks her for helping him figure that one out.

Jae Yul exits the building, takes a bat to Tae Young’s car and smashes the windows. He sees Tae Young hanging out the window, trying to apologize, and yells back “shut up!” He then walks away, calls his editor to drop the lawsuit.

Jae Yul returns home to find a bunch of people over at the house, and is very surprised to learn that Hae Soo indeed does have a boyfriend. Soo Kwang comes over to give Jae Yul some 411 on everyone in the room. He mentions that Dong Min and Jin Young are divorced, Hae Soo and Dong Min kissed before (Dong Min being her first love), Hae Soo was Soo Kwang’s first kiss and that Hae Soo will probably marry PD Choi soon, ONLY because he conceded.

At that point, Jae Yul has a genuine question to ask: “does everyone have to kiss each other and live together to play together?” It gets better, of course, when Jae Yul follows that question with another. He asks Hae Soo if she is sharing PD Choi with Min Young, the friend.

Hae Soo is confused, so Jae Yul continues by exposing that he saw PD Choi and Min Young kiss before.

And the party becomes a complete chaos. Min Young shrieks that she was the first to like PD Choi. Soo Kwang starts to beat PD Choi and kicks Jae Yul when he tries to break up the fight. Other people jump in and it just becomes a giant mess.

After that Jae Yul officially becomes the household outcast, with everyone leaving the room whenever he is around. Adding salt to his wound is a call from his hyung in jail, claiming to stab Jae Yul in the neck when he out this time. For some reason Jae Beom believes Jae Yul has killed someone, despite Jae Yul’s repeated denial. However, he does declare jokingly that he can fight back now! He ends with asking Jae Beom to drink when he is out. Jae Beom laments that his little brother is all grown up now.

Hae Soo goes home for a visit and we are introduced to her parents. Her father is mentally handicapped and is unable to take care of himself. As Hae Soo and her sister are giving him a bath, her mom escapes to another room to take a call. We get a flashback of Hae Soo and her sister watching their mom kiss another man when they were children. This is probably the trauma Dong Min brought up before.

Tae Young calls up Dong Min to ask him to meet and counsel a prisoner, who turns out to be Jae Beom.

At the hospital PD Choi catches Hae Soo in the staircase and tries to apologize. She walks away but breaks her heel and ends up sobbing uncontrollably. PD Choi tries to hug her, but she rejects him completely. This relationship is pretty much over.

At home, Jae Yul tries to apologize as well by offering up a bottle of wine and his sob story of betrayal by his friend and girlfriend. Hae Soo accepts a FULL glass of wine and then throws it in his face; she even threatens to kick him out of this house sooner or later. His response? He chucks a glass in her face as well, explaining that he has warned her before about retaliation. He then cocks a smile and ask if she feels like drinking now.

This episode was a little slower than the last, but still very bit good. I’m glad we learn a bit more about Jae Yul’ soft side and Hae Soos’ backstory. I’m interested to see what’s up with Jae Beom and all the side characters. A little more romance would have been fun, or more interactions between the two main characters that help to move them forward, but I guess this is just episode two and I’m being too impatient!

BTW, I also LOVE Hae Soo’s T-shirts which say PSYCHO and PLEASE. She was wearing the PSYCHO one when she opens the door for Jae Yul, and the PLEASE one when they have the wine fight. I’m not as big a fan of Jae Yul’s outfits though – the suit plus sandal combo is really weird, but I’m sure that plays into the quirkiness of his character. Maybe we will learn the reason behind his madness soon. For now, I shall leave you with this photo of his face.