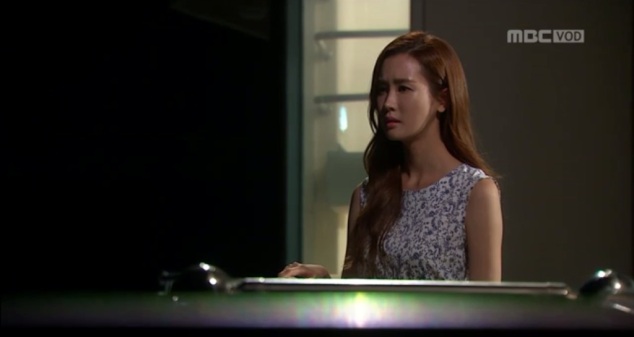 At last, two of Hotel King’s biggest secrets have been revealed to the characters. And honestly, neither of the reveals turned out to be that exciting or unexpected. Despite having already very low expectations for this drama nowadays, I was still disappointed that nobody was able to conjure up a little more appropriate emotion in such pivotal scenes. Instead, the characters resorted back to their usual way of brushing aside important information, and picking and choosing less interesting things they’d rather focus on, namely more of Mo-ne and Jae-wan declaring their undying love for each other. Ugh, no thanks. C’mon…enough of that already.

Jae-wan carries an unconscious Chairwoman Baek from Joong-goo’s place back to his house, while Mo-ne is reprimanding the caretaker for letting her leave on her own. Come to think of it, Jae-wan’s house probably wasn’t the safest place to hide Chairwoman Baek from Joong-goo and her various enemies. Jae-wan’s hopeful that his mother has regained her right mental state after recognizing Joong-goo earlier. But when she wakes up later, she is still in her 5-year-old mentality. It appears that her outburst at Joong-goo’s house upon recognizing him was just a fluke, and was probably caused by her overwhelming hatred for the guy. He is indeed memorably evil. 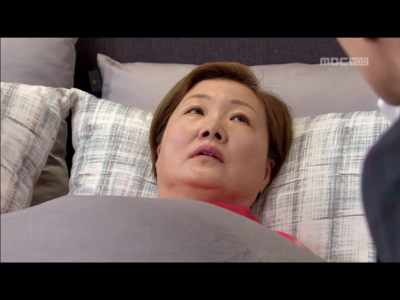 Why are people always watching me sleep?

As Joong-goo and Lay Kim are discussing whether or not Chairwoman Baek really is insane, since they were a little frightened by her recognizing Joong-goo, Jae-wan barges into Joong-goo’s house. Joong-goo’s first reaction is to yell at Jae-wan for entering with his shoes on. Yeah, that seems about right. Jae-wan has that crazy look in his eyes, per usual, and grabs Joong-goo’s walking cane and starts smashing things left and right. Joong-goo and Lay Kim are so scared by this that they are cowering on the couch, out of Jae-wan’s way. After he’s done destroying a bunch of vases, Jae-wan threatens the two jackasses that this is the last time that he will be treating them like human beings. Pretty sure that we’ve heard him say that before, but then again, Jae-wan is notoriously bad at keeping promises. 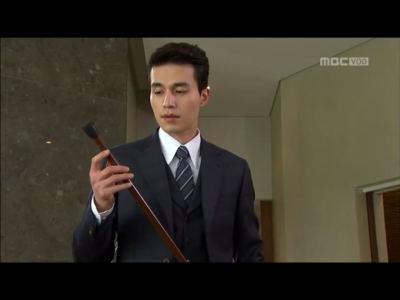 Back at Jae-wan’s house, his mom and Mo-ne patch up his injured hand that came as a result from all that vigorous vase-smashing. They decide to then have a “sleepover” in his living room, with Chairwoman Baek sleeping between Mo-ne and Jae-wan. This seemed like a cute idea, until Mo-ne and Jae-wan almost start making out while his mom is sleeping in between them. Could they be any more inappropriate? These two seriously have no shame. Chairwoman Baek, however, starts moving around in her sleep, preventing them from their make-out session. 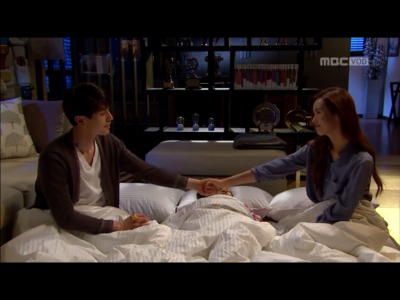 So not the place or time.

The next day, everyone’s favorite character, Roman, is back! Yay Roman! But neither Jae-wan nor Chairwoman Baek look very happy that he’s back. It’s understandable that Chairwoman Baek is skeptical of him because she doesn’t recognize him as her son, and is therefore a little scared. But I have no idea why Jae-wan would not be more thrilled to see Roman. Damn, Roman was probably right. Jae-wan is totally trying to steal his mom away from him. Being the wonderful guy that he is, Roman actually blames himself for leaving his mom here by herself, allowing something like this to happen to her. Jae-wan doesn’t say anything to alleviate Roman’s unnecessary guilt, which is typical Jae-wan behavior anyways. But he does promise that he will make Joong-goo pay for what he’s done. Talk is cheap, Jae-wan. 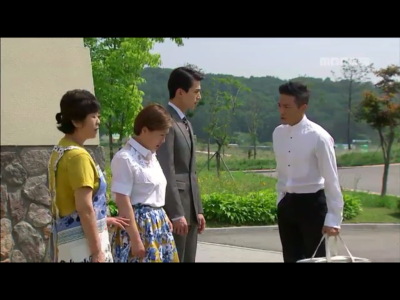 Jae-wan’s internal affairs “inspection” resumes at Ciel, and today’s surprise witness testimony comes courtesy of none other than Joong-goo. While Jae-wan continues to refute the investigators’ attacks and claims that he bribed officials, leaked hotel information, and whatever else, Joong-goo is here to provide some evidence about how Jae-wan has been after the hotel for himself this entire time. He tells the investigators the story that Lay Kim tried to reveal last time he was here, but was attacked by Jae-wan and Mo-ne before he had the chance to tell everyone at the hotel. 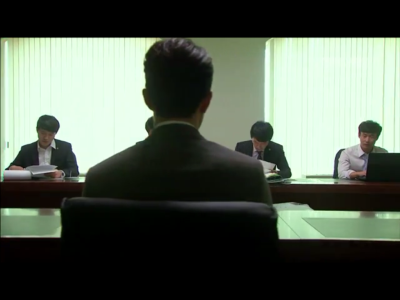 Back when Jae-wan was the GM of a Las Vegas hotel, he plotted to get close to Chairman Ah during one of his visits there. Jae-wan purposely gave food to him that contained clams, despite knowing that he had a severe allergy towards them. And when Chairman Ah was dying from the allergic reaction, Jae-wan was conveniently there to save him. He gained Chairman Ah’s trust and admiration after that incident, even though Jae-wan had orchestrated the whole thing himself. 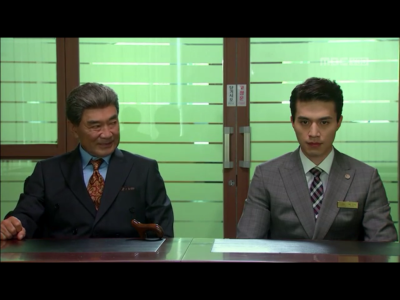 Joong-goo’s got secrets to spill!

Immediately after the “inspection,” a video of it is leaked and sent to all of the hotel employees. In the video is Joong-goo retelling the clam allergy story, and Jae-wan admitting that he purposely fed Chairman Ah clams in order to befriend him and get to Ciel. When confronted by the team leaders about the video, Jae-wan admits that everything he said was true and that the video was not fabricated. Mo-ne later tells him that she saw the video and was angry about what she found out. But instead of running over to confront him about his attempts to murder her father, she is hanging out on a balcony pondering whether or not she should text Jae-wan that she’s going to sleep now. Guess she wasn’t really that angry then. 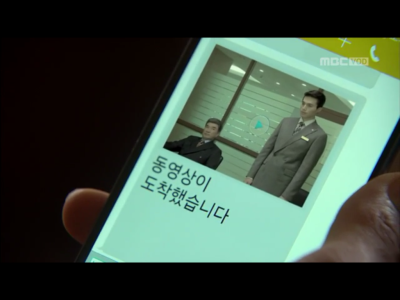 Who had everybody’s phone numbers?

The next day at Ciel, Jae-wan organizes a Q&A for the hotel employees to ask him any questions they have regarding the video of him and Joong-goo. If they are all at this Q&A, who’s working at the hotel then? This is legit the worst hotel ever. Don’t stay here! As usual, Mo-ne is only concerned about Jae-wan’s feelings and suggests that he not go through with it because he will be asked difficult questions. Yo, did she forget that he almost murdered her dad with clams?! He ignores her suggestion and proceeds with the Q&A. He admits that he purposely got close to Chairman Ah so that he could come to Ciel, with the full intention of becoming the next owner of the hotel. When asked why he chose Chairman Ah and Ciel, Jae-wan reveals that Joong-goo had made him believe that Chairman Ah was his biological father up until a few months ago. Hearing that Jae-wan thought he was her brother, Mo-ne runs out of the auditorium. 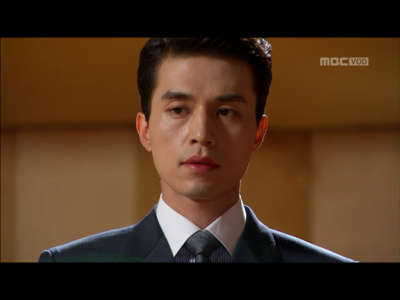 After running away from the Q&A, Mo-ne recalls how when she first met and fell in love with Jae-wan, he would act like he hated her and told her to stay away from him. Then she thought of how he eventually admitted that he had feelings for her, and now she knows that at that time he still thought that she was his sister. Ew. Woo-hyun finds her sitting by herself as she’s thinking about how she was once siblings with Jae-wan, and gives her an envelope from Jae-wan and tells her that he’s waiting for her in the garden. In the envelope is evidence that Jae-wan gathered from Chairman Ah’s old doctor, who was murdered by Joong-goo in that fake car accident, that proves Joong-goo was responsible for her dad’s death. Didn’t we know about the pills already? What we wanna know is who pushed him out of his window!

He was your brother…

Jae-wan waits for awhile in the garden for Mo-ne, but there are no signs of her. Finally, as he’s getting ready to call it a night and leave, she arrives. They obviously have to talk about how they were once brother and sister, but contrary to a normal person’s reaction, Mo-ne is neither disgusted nor weirded out that he fell in love with her, thinking that she was his sister. WHAT?! Instead, she acts all cutesy and flirty with him, saying that he was so mean to her when he thought she was his little sister, and that he should have been nicer to her. WHAT?! She says that she’s not angry with him, and is touched that he loved her despite thinking that she was his sister. WHAT?! Ew ew ew. And with that awkward talk done with, Mo-ne tells him to go after Joong-goo and to make him pay for the damage he’s caused. They embrace and talk about how much they love each other. All right after they just had a discussion about how Jae-wan had romantic feelings towards her while she was his sister. Gross.

In the meantime, Roman visits Chairwoman Baek at Jae-wan’s house and has a strange conversation with her. He is visibly upset, and even she is able to see that. He tells her that he has always tried to be a son that listens to his mom, but just this one time, he’s going to have to disobey her. After saying that to her, he leaves and goes to Joong-goo’s house. Roman waits outside of his house until he sees Joong-goo walking down the street. Joong-goo thinks that Roman’s here to talk business or something with him. But Roman just says a few words to him and walks by him. After he has walked away from Joong-goo, it’s clear that Roman had stabbed him in the side. Joong-goo clutches his side, and falls to the ground bleeding. At this very moment, Jae-wan drives up to them for some reason and greets Roman. He then sees a bleeding Joong-goo lying on the ground, and Roman’s hand covered in blood. 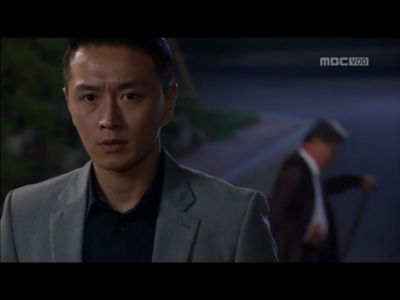 Told you not to mess with Roman.

Roman apparently was not kidding around when he threatened Joong-goo with a knife a few episodes ago. 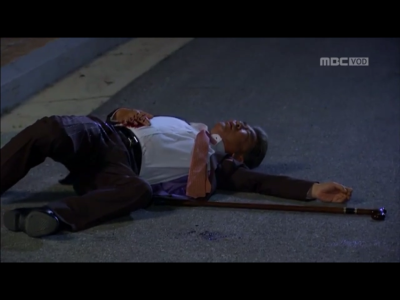 Chae-kyung is being investigated for lobbying a prosecutor, aka when she did that favor for Mo-ne and helped to get Chairwoman Baek out of jail a few episodes ago. When Jae-wan hears about this, he acts like he really cares about her. But Chae-kyung sees right through him, and just tells him to shut up about this to Mo-ne so that she doesn’t show up to fake apologize. Love you, Chae-kyung. 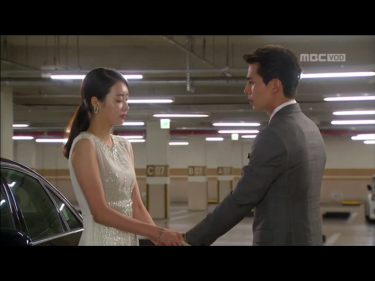 Woo-hyun finds out about Mo-ne’s engagement and pretends to be okay with it. He is still, however, lamenting that he never confessed his feelings to her.

After Mo-ne ran out of the Q&A, she and Cha Soo-ahn run into Lay Kim in the lobby. Lay Kim makes fun of Jae-wan for being a disgusting person for falling in love with his sister, and that Mo-ne wouldn’t have had to feel this shame if she had just listened to him last time. Mo-ne is mad that he’s talking about Jae-wan, so she gets Cha Soo-ahn to beat up Lay Kim with her. Okay, I’m pretty sure that this is assault. Is Jae-wan really worth assaulting someone over? The answer is nope, not at all. 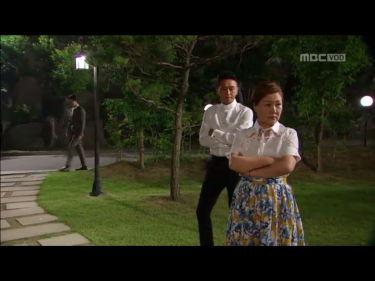