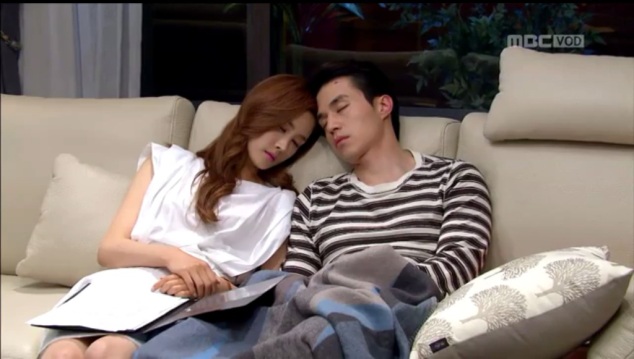 Remember that war that was coming to Ciel? Well, it’s here and it’s getting scary. Characters are now making extremely drastic measures to get what they want, and they don’t care who gets hurt in the process. While everyone is busy plotting how to take down their worst enemies, there’s still some time leftover for a few happy and definitely not-so-happy reunions. The winners and losers of the “2014 Ciel Hotel Battle Royale” are going to be determined by how well these reunions turn out, so let’s hope everyone has good small talk skills.

Squinting suspiciously at the coat closet that Jae-wan and Mo-ne are hiding in, Roman chooses to not blow their cover to the real estate agent/Ciel buyer, John Howard, who’s posing as his cousin around the hotel. Roman convinces him to leave the room, and Jae-wan and Mo-ne are able to leave the room without being discovered. Now that they know Chairwoman Baek’s evil plan is to divide and sell Ciel, Jae-wan promises Mo-ne that he will help her stop it. He says that he’s willing to help her because he wants to pay back Chairman Ah, and not because he wants to win her back. How very noble of him, but then again he did sort of poison her dad…so it’s the least he can do.

Jae-wan tells Mo-ne to look for clues about Chairwoman Baek in Chairman Ah’s belongings. If only they had those journals hidden away at the bank by Chairwoman Baek! Alas, those journals are going to stay right there unless Mo-ne somehow manages to get Chairwoman Baek’s stamp of approval, literally. The mission isn’t a complete fail, however, because Mo-ne finds a picture of young Chairman Ah, Joong-goo, a mysterious lady (Baek Mi-yeon), and other Ciel employees taken many years ago on a company excursion. Alongside that, she discovers that her father wrote, “C1998-K305,” on a number of documents and mementos.

The food poisoning incident of the bloggers still hasn’t been resolved, mostly because Chairwoman Baek refuses to apologize or provide compensation to them. She knows that this will only cause further problems for the hotel, and the press will probably get ahold of the story soon. And that’s exactly what she wants. Roman insists to Jae-wan that his mother wasn’t involved in poisoning a bunch of people, but a quick phone call to the food & beverage team leader, who helped Chairwoman Baek, confirms that she did. Annoyed that Jae-wan keeps getting in her way, Chairwoman Baek tells Joong-goo that he has to get rid of him, either by sending him to jail or abroad. Even though one of those options is clearly better than the other, Joong-goo chooses to somehow send Jae-wan to jail.

While Chairwoman Baek is enjoying the bad press that the food poisoning incident is getting, Mo-ne decides to take matters into her own hand. She convinces the Ciel surveillance room workers to give her the video of when the leader of the blogger group tried to feel her up the last time she went to clean his hotel room. She takes Woo-hyun with her to the hospital to do some apologizing and blackmailing, but mostly apologizing, of course. She shows the blogger leader the video of him acting inappropriate towards her and threatens to reveal it to his family and colleagues if he doesn’t drop the complaint against Ciel. He agrees, and makes up a story about how he accidentally gave a snack to the group that gave them food poisoning, and it wasn’t Ciel’s food. 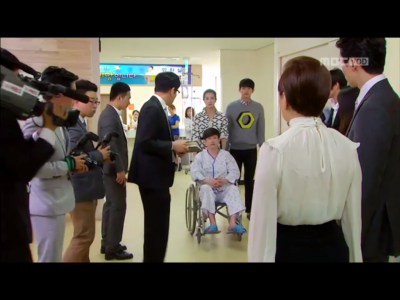 “Hi, I accidentally poisoned my friends.” – That Guy.

Even though his mom’s plan to bring down Ciel with poisonous salad dressing didn’t work out as planned, Roman is more confident with his plan to get rid of Joong-goo. When Joong-goo finds out that Roman is meeting up with John Howard, someone he knows isn’t his cousin, he presents two envelopes to him. One contains the USB of Chairwoman Baek with Chairman Ah on the night of his death, and the other contains all the evidence necessary to convict Jae-wan and send him to jail. Roman offers to trade Joong-goo some land that he owns for the envelopes. Joong-goo doesn’t agree right away, but is willing to go check out this land of his. Once Roman lures Joong-goo to an open field in the middle of nowhere, he pushes him into a deep grave that he had prepared beforehand.

Having successfully retrieved both envelopes and left Joong-goo to die in the grave, Roman meets up with Jae-wan. He reveals to Jae-wan that it was Joong-goo who ordered the attack on him for the USB, and that Joong-goo was prepared to send him to jail with the evidence in the envelope. Roman burns both of the envelopes and tells Jae-wan that he has paid back his debt to him. Jae-wan is obviously confused about what debt he’s talking about only because he doesn’t know that Roman’s actually Joo-wan, his younger “brother.” The last parting gift that Roman gives Jae-wan is letting him know that he buried Joong-goo and has no intentions of rescuing him.

After letting these revelations sink in, Jae-wan goes home, seemingly not caring if Joong-goo lived or died. Jae-wan is numb from learning that Joong-goo had sent the thugs after him and was going to send him to jail. But old habits die hard when he can’t help himself, and goes back to find the grave. There, he asks Joong-goo what he even means to him, if he just considers him to be some dog or robot that he controls. In a rare moment of honesty, Joong-goo tells Jae-wan that he represents the past to him. And it’s a terrible past that he has tried so hard to forget and get rid of. Similar to when Jae-wan had reluctantly saved Joong-goo from jumping to his death, he wants to let Joong-goo die but just cannot do it. 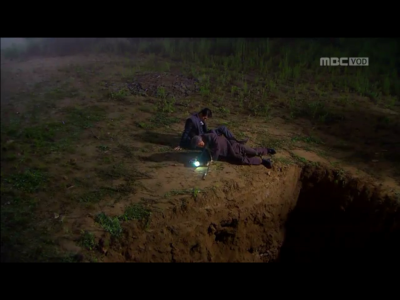 After pulling him out of the grave, Jae-wan begs Joong-goo to let him go because they both can’t survive if they continue on like this. Joong-goo doesn’t exactly agree to this but he reveals to Jae-wan that his real name is “Hyun-woo,” a name chosen by his mother, and has connections to Joong-goo. Once he’s back home, Jae-wan takes out the robot necklace that his mother gave him as a baby, and reflects on the family that he never had. Mo-ne comes back to his house after being there earlier to work on Ciel matters, and sees him looking at the necklace. When she asks him about it, Jae-wan tells her about being abandoned as a baby and how he just found out his real name is “Hyun-woo.” Mo-ne calls him by that name and tells him that she doesn’t want the two of them getting hurt and being sad anymore. They kiss and get back together. Finally!

Omg tears. So many tears.

Joong-goo may have survived Roman’s grave, but that doesn’t mean that Chairwoman Baek is ready to let him back as the Vice Chairman. He shows up at Ciel the next day to let Chairwoman Baek know that he knows about the USB video footage. Someone make a backup copy of it already! Chairwoman Baek’s face doesn’t register much shock, but his comments prompt her to call him, “worse than a bug.” Joong-goo’s face immediately turns white at this because it was the exact same thing that Baek Mi-yeon said to him before her car exploded all those years ago.

Chairwoman Baek pays a visit to her old house that she lived at as Baek Mi-yeon, not knowing that Jae-wan is following her. Joong-goo may also not be far behind since the person he believes to be falsely using Baek Mi-yeon’s name sent his wife a letter inviting her to meet her at the address. Is there going to be the first ever “family” reunion for the three of them?

No “Welcome” doormat at this place.

Chae-kyung finds out for Jae-wan that Roman is not Chairwoman Baek’s biological son. When Jae-wan brings up this fact to Roman during their envelope-burning confrontation, he’s surprised to learn that Jae-wan is looking into his background. Will Jae-wan soon find out that Roman is actually Joo-wan?

Jae-wan asks Roman why he didn’t reveal him and Mo-ne hiding in John Howard’s coat closet, Roman just says that he doesn’t remember. Not a very creative response…

Roman is so over it.