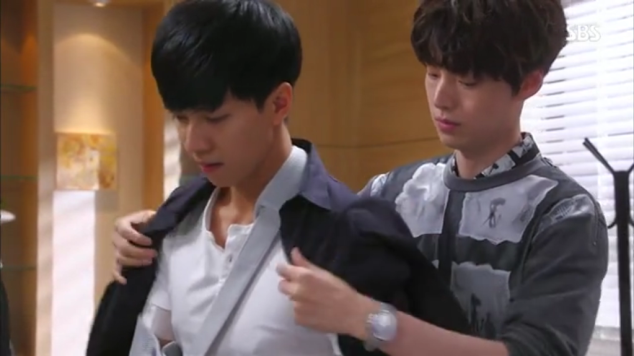 awww bromance. tae-il you are so domesticated! ^^;

LSG is back on set! How exciting!

Last episode left us in Dae-gu’s room where he is about to face off with Hyung-chul. The two fight in the dark some more before moving out into the living room. All appears dim when Hyung-chul has Dae-gu beat and proceeds to taunt him with some comments about his mom.

Hyung-chul pulls out a knife and… downstairs Pan-seok arrives, but gets a phone call! Gook, Tae-il and Soo-sun all come back from getting fried chicken and see Pan-seok standing at the entrance. They decide they need to go get more fried chicken to accommodate the guest. (cue NOOOOOOO). Evntually Pan-seok makes it up the stairs and just in the nick of time to save Dae-gu, who is barely holding on for dear life. Pan-seok sees Hyung-chul and seems to be in complete shock that his ex-partner is the culprit!

Hyung-chul takes this opportunity to hit Pan-seok and run away. Pan-seok is hurt in the eye(?), but still tries to capture Hyung-chul; unfortunately he did not catch up. Gook, Tae-il and Soo-sun return to the apartment, and all of them bring Dae-gu to the hospital. Pan-seok declares that he must catch Hyung-chul because he is a “bastard who stabbed my child.” (cue AWWWWWWW) Soo-sun asks to join in on the case and Pan-seok (surprisingly) allows it. Chief Kang also learns of Hyung-chul’s attack and is clearly disturbed.

Pan-seok visits the hospital to speak to Dae-gu, but Dae-gu is clearly still suspicious of Pan-seok’s intentions and insists that Pan-seok is just playing tricks on him (c’mon, man!). Dae-gu finally brings up the pendant and how he say Hyung-chul with it at the school, when he only told Pan-seok where it was. Pan-seok resolves to prove to Dae-gu that he is a good guy by bring Hyung-chul to justice.

a la the cold stare

Meanwhile Sa-kyung and Tae-il team up to find out the location of the missing man from last episode. They track him down and finds him living as a woman. The man tells the story of how he thought disappearing from his family’s lives would make thing easier, and begs them not to tell his family his whereabouts. Sa-kyung agrees to that but tells him she would need to let them know he is alive. After this Tae-il does not want to hide from his parents anymore and decides to pay them a visit to reveal to his intention of staying on as a detective. His father is clearly upset by this fact and expresses his extreme disappointment in BOTH of his sons. Oh, man, I wonder what Tae-il’s brother did?

At the station, Pan-seok tells the team of Dae-gu’s past and everyone is completely shocked to learn the truth, except for Soo-sun, of course, who reveals she has already know Dae-gu is Ji-yong. Despite all this, everyone is confused as to why Hyung-chul wants to harm Dae-gu. Pan-seok also identify Hyung-chul to team, and mentions the fact that Hyung-chul used to be his partner. He assigns Tae-il and Gook with the task of keeping Dae-gu safe, while the rest of try to track down Hyung-chul.

Tae-il and Gook go back to the hospital and find Dae-gu trying to get out of his hospital garb. The two of them stop him immediately and promise him that they will find Hyung-chul on his behalf. 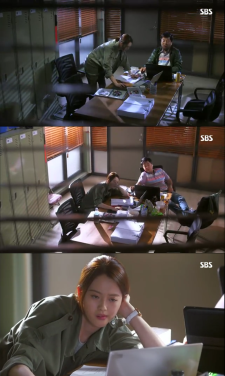 can’t deny that this was pretty cute ^^

Meanwhile Soo-sun and Eung-do are going through surveillance videos again. I wonder where they get these usbs from. Do they not have a central system? Anyway, Soo-sun spots him and they identify the neighborhood. The three of them head out in undercover: Soo-sun as a delivery lady, Eung-do as a watermelon salesman and Pan-seok hides out in the van which is now decked out with nail salon logo. Soo-sun and Eung-do both go on without being noticed, but Hyung-chul is still too slick to not notice something’s wrong with the van. The three immediately try to chase after them, but Hyung-chul gets into a car and starts driving. Pan-seok stands in front of the car in an attempt to stop Hyung-chul but gets hit. Soo-sun tries to go after the car on her motorbike but is not fast enough.

Soo-sun is obviously overwrought with guilt at not being able to catch Hyung-chul. She texts Dae-gu to ask him how he is doing and apologize for not visiting. Dae-gu throws a mini tantrum and is upset that she did not visit, but says he didn’t ask her to visit anyway. Tae-il tells Soo-sun that Dae-gu is having trouble sleeping, and she tells him about Dae-gu’s video trick. Plus Tae-il and Gook both take excellent care of Dae-gu. Lots of awwws all around. 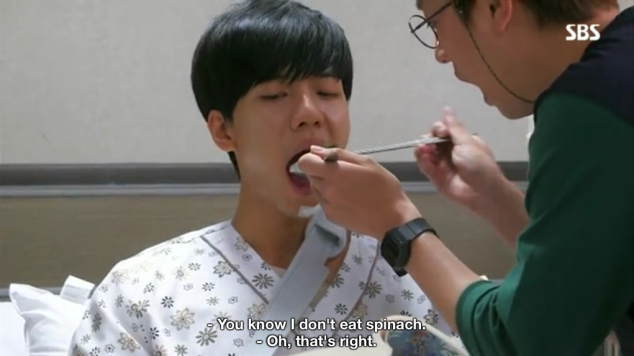 Dae-gu comes back to work and everybody is very happy. He is assigned to stay at the station until his arm officially heals. Chief Kang holds a meeting and tells Pan-seok that his team must take on this new case and give the Hyung-chul case to another team. Pan-seok is completely upset and tries to argue his way, but she convinces him that Dae-gu is not fit for this case. Right after Pan-seok leaves she calls Assemblyman Yoo, and he in turn calls someone else to report that things have gotten more complicated.

Pan-seok speaks to Dae-gu privately and tells him he must not do anything to harm Hyung-chul. Pan-seok goes on to explain that if he kills Hyung-chul, then his mother would become the mother of a criminal. Nice.

Soo-sun is tasked with keeping Dae-gu safe in the station while everyone else goes out to track down Hyung-chul. Soo-sun could not help it but fall asleep since she was up all night before. Dae-gu does a sweet move by standing in the way of the sun to give her some shade while she sleeps. Yes, it is sweet but wouldn’t it be easier to pull down the shades?

Anyway, just right then Dae-gu gets a call from Hyung-chul asking to meet up. He, of course, goes and the team ends up looking for him franctically. Dae-gu gets to a parking garage and hears Hyung-chul’s voice. He walks closer to the voice only to find a cellphone on the ground.

Hyung-chul attacks and Dae-gu runs away to hide under a car. Hyung-chul finds him and taunts him with the fact that he is hiding again just like when he hid under the bed. So! Hyung-chul knew Dae-gu was under the bed this whole time? I wonder why he didn’t kill Dae-gu then?

Just then, a car pulls out and out come another hitman, who … attacks Hyung-chul! The hitman proceeds to choke Hyung-chul while Dae-gu is watching beaneath the car, having flashbacks of his mother’s murder.