There’s a snake in the garden.

Excuse me, Board of Tourism, but how in the world did Ciel get a 7-star rating? Nobody at this place seems to be very competent at their job, so it’s no wonder that people are getting fired left and right. Guests are having such a terrible time at the hotel. On top of all that, there’s literally either a scandal or hidden camera showing up around every corner. But before a few stars are knocked off of Ciel’s rating, let’s see who will emerge unscathed from the “2014 Ciel Hotel Battle Royale”…because it is getting ugly up in here.

Jae-wan was the last person who was actually good at his job at the hotel, besides the whole “kind of murdering your old boss” thing, so of course, Mo-ne fired him. Reeling from her discovery that Jae-wan is the son of Joong-goo, Mo-ne fires him for both taking part in her dad’s death and breaking her heart. Hopefully the former was weighted more heavily than the latter for her. So cold is her heart now that she doesn’t even seem to care when Chae-kyung tells her that Jae-wan is sick but refuses to go to the doctor. His reason being he wants to experience the physical pain in order to forget his heartache over Mo-ne. A bit dramatic, no? Mo-ne tells Chae-kyung that she can have him if she wants him that badly. Okay Mo-ne, but no backsies!

Jae-wan recovers and during his final week at Ciel, a reporter comes around with some footage he filmed the night of Chairman Ah’s suicide. It shows that Chairman Ah wasn’t alone and someone else was in his office with him. The reporter was only able to find the blurry footage when his broken camera was recently fixed. Jae-wan buys the footage off him, and then hires an image restoration expert to clear up the images. Whodunit?!

The Yoo Joo-min concert is still happening, and even this seemingly fun event is turning into a big ol’ mess. Nothing seems to be going right for Ciel lately. At the dress rehearsal, right when Mo-ne and Jae-wan are enjoying the nice singing, the electricity fails causing the equipment to malfunction and explode around them. Yoo is extremely concerned about the apparently super expensive equipment, so Mo-ne rushes to save it while the sparks are literally flying. It’s no use though because the electricity in the concert hall shuts off, thereby cancelling the concert. Watching the chaotic scene in the concert hall is none other than Manager Baek, who exchanges a look with Jae-wan that confirms that this was her doing.

Someone forgot to pay the electric bill.

After last episode’s confrontation at Haemil and now the concert meltdown that almost harmed Mo-ne, Jae-wan is determined to expose Manager Baek as the culprit behind Ciel’s recent troubles. He searches her office while she’s out, looking for evidence and her secret surveillance room. While unable to find either, he receives a text message from Manager Baek during his search warning him to put things back where he found them. Since she is somehow watching him at the very moment, Jae-wan scans her office and finds the hidden camera she has on her bookshelf. He looks directly into the camera and gives a sarcastic bow, knowing that she’s watching. Game on, Manager Baek.

Jae-wan receives confirmation that the reason behind the concert hall fiasco is the inferior building materials used for its construction. Since the concert hall was Chairman Ah’s project, the Board of Directors immediately concludes that he was guilty of embezzling money from the project, and used cheap materials to cover it up. When Manager Baek accuses Mo-ne of trying to hide behind Jae-wan instead of accepting responsibility for Chairman Ah’s crimes, she confronts Jae-wan of conspiring with Joong-goo to further discredit her father. Jae-wan tells her that he knows about all of Joong-goo’s shady deals, and this was not one of them. Instead, he reveals to her that Manager Baek is responsible and how she has bugged all the important spots in Ciel with surveillance equipment.

When Mo-ne confronts Manager Baek about the hidden cameras, she turns the tables on Jae-wan by saying that she only wire-tapped the hotel because she was suspicious of Joong-goo and Jae-wan after Chairman Ah’s death. To further gain Mo-ne’s trust in the situation, Manager Baek shows her pictures she recently took of Joong-goo and Jae-wan together. According to her, this shows that Jae-wan and Joong-goo have only strengthened their relationship after he’s been freed from jail. Mo-ne accepts her explanation and considers her an ally that her father placed besides her. This girl has no clue that she’s being played. 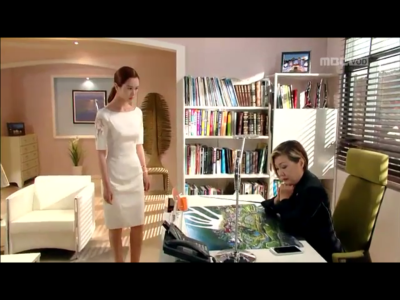 Jae-wan gets back the enhanced version of the reporter’s Chairman Ah video, and it shows that the other person in the office with him that night was a woman wearing a star-shaped necklace. Although the woman’s face is unclear, Jae-wan recognizes the necklace as the one he found in Manager Baek’s office when he was doing his earlier search. He rushes back to Ciel and takes her on a not-so-fun joyride, demanding that she tells him what exactly she did. He gets nothing out of her because Manager Baek starts freaking out when Jae-wan is speeding down the highway, and only stops when Roman chases them down and takes her away.

Manager Baek recovers enough from the drive with Jae-wan to hold a secret Board of Directors meeting the next day, purposely not inviting Jae-wan or Mo-ne. After getting word of the meeting going down at Ciel without them there, Jae-wan and Mo-ne rush over just in time to hear Manager Baek declare that they have effectively voted out Mo-ne as Chairwoman of Ciel.

Hope you weren’t planning on reading that.

Joong-goo is out of jail, but has no friends left. Manager Baek bought off all of his old allies, and they answer to her now. Even Mo-ne kicks him while he’s down by telling him to move out of his Ciel housing within the week. And her parting gift for him is a nice caged bird, just like the ones he used to torment her with. Whatever, it’s not like he doesn’t deserve it.

Woo-hyun reveals to Mo-ne that his older sister had a disability, and that she was treated differently by others because of it. He’s mentioned before that his sister is the reason for his falling out with his father.

The car ride with Jae-wan is the second time that Manager Baek has had a panic attack during a drive. The episode also revealed that she has major burn scars on her back. Was she in a severe car accident before?